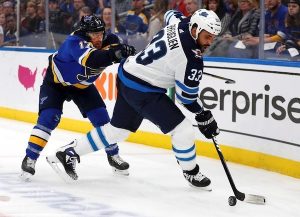 WINNIPEG — Veteran defenceman Dustin Byfuglien has been suspended without pay by the Winnipeg Jets in a move that frees up space under the salary cap.

Byfuglien has been on a personal leave of absence since training camp began on Sept. 13, with no timeline for his return.

Head coach Paul Maurice said Sunday that Byfuglien was suspended for not reporting to training camp.

“It is absolutely procedural and Dustin was aware of it,” Maurice told reporters after the team’s morning before Sunday night’s home pre-season game against the Calgary Flames.

Byfuglien has two more years remaining on his five-year, US$38-million contract. He’s set to earn $8 million this season and $6 million in the final season. If he doesn’t report by opening day of the regular season, his salary won’t count under the cap.

Maurice, when asked about the reports, told the media that “privacy was paramount.” He added he’d met with Byfuglien on Thursday and had a “wonderful” conversation.

Byfuglien is coming off an injury-marred season in which he played 42 regular-season games after suffering a concussion and two ankle injuries.