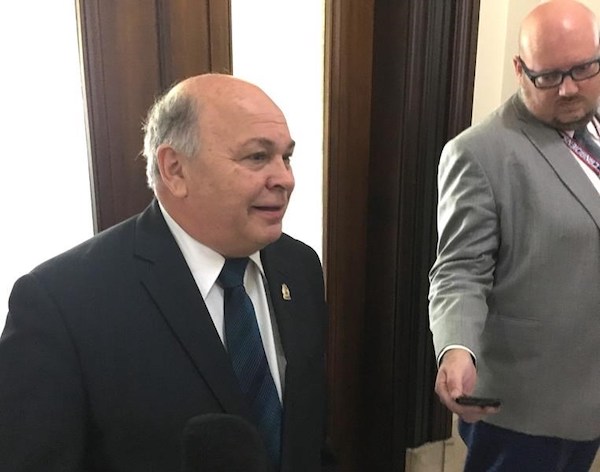 Rick Wowchuk, a Progressive Conservative member of the legislature, speaks to reporters at the Manitoba legislature on Wednesday, Sept. 25, 2019. A Manitoba politician who was investigated for showing an assistant a picture of naked women and making inappropriate remarks says he has learned his lesson. (THE CANADIAN PRESS/Steve Lambert)

WINNIPEG — A Manitoba politician who was investigated for showing an assistant a picture of naked women and making inappropriate remarks says he has undergone sensitivity training, has learned his lesson and hopes to move on.

“I learned to become a better person and watch my choice of words and actions,” Rick Wowchuk, a Progressive Conservative legislature member, said Wednesday in his first meeting with media since news of the investigation broke.

Shortly before the Sept. 10 provincial election, CBC News reported that Wowchuk’s former constituency assistant, who was not named, said the politician made a joke leading her to believe there were animal photos on his cellphone before he showed her a picture of naked women holding chainsaws.

The CBC report said Wowchuk was the subject of an internal investigation that found he violated the legislature’s respectful workplace police on five occasions, including one in which he phoned his assistant while in the bathtub and another where he made comments about her wearing a bikini.

Wowchuk was allowed to remain in the Tory caucus and was re-elected in his Swan River constituency with 68 per cent of votes cast when the Tories won a second consecutive majority mandate.

Wowchuk, who had previously issued a brief written statement, said Wednesday he accepts his actions were wrong.

“It occurred. There was a violation on five instances of the respectful workplace (policy). I acknowledge. I take full responsibility,” he said.

“I’ve apologized to caucus and to individuals involved and I just want to work hard for the people of our constituency.”

Wowchuk, citing a legislature policy which requires confidentiality, would not discuss details. He later clarified that he didn’t apologize directly to the woman.

“I think when I released my statement, I made an apology to anybody who might have found my comments and my actions offensive.”

Tory caucus chairman Wayne Ewasko earlier this month refused to elaborate on why the Progressive Conservatives allowed Wowchuk to remain.

Manitoba political leaders have been trying to find ways to address sexual harassment on the job.

The PCs implemented a “no wrong door” policy in 2018 after several women made allegations that former NDP cabinet minister Stan Struthers tickled and groped female staff or made sexual remarks.

Months later, Tory Cliff Graydon was ousted from caucus following reports that he had invited two women on separate occasions to sit on his lap, and had invited one woman to lick food off his face.

Former Tory legislature member Nic Curry decided not to run for re-election after he faced allegations earlier this year of making inappropriate comments.