Bombers QB Matt Nichols Finished for the Season with Injury 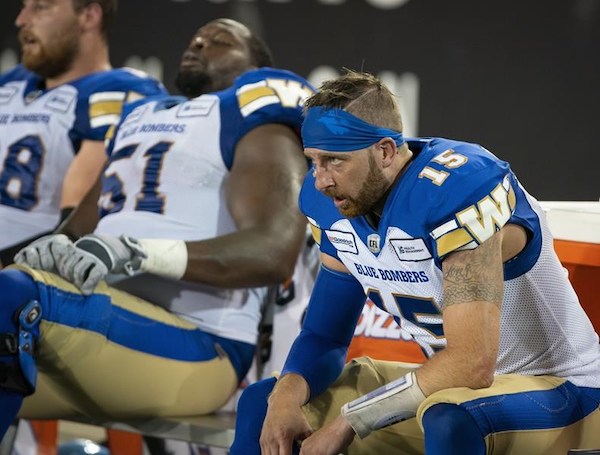 Winnipeg Blue Bombers quarterback Matt Nichols (15) on the bench after his final possession during second half CFL football game action against the Hamilton Tiger-Cats in Hamilton, Ont. on Friday, July 26, 2019. (THE CANADIAN PRESS/Peter Power)

“Matt Nichols sustained a significant shoulder injury in Week 10 from which he has been diligently rehabbing to try and avoid season-ending surgery and return to the playing field. After rehabbing conservatively for a period of six weeks, it was determined by the medical team that surgery would be required and a return to the field this season would not be possible. Nichols underwent successful surgery this afternoon.”

Nichols suffered the injury on August 15 during a game against the B.C. Lions. He was placed on a six-game injured list with the hope of making a return later this season.

The Blue Bombers (9-4) host the Hamilton Tiger-Cats (10-3) at IG Field on Friday night. Chris Strevler will make his fifth straight start. The Bombers are 2-2 since Nichols was hurt.