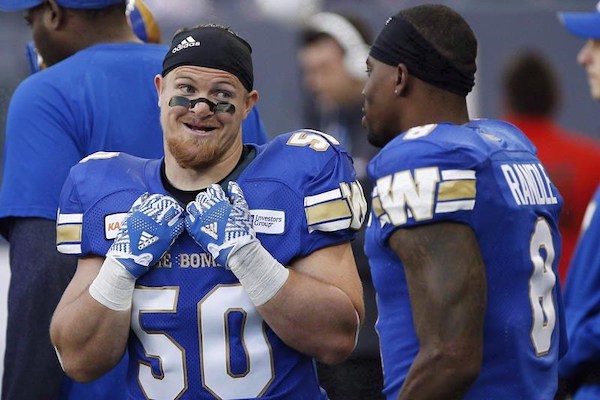 Winnipeg Blue Bombers’ Adam Bighill (50) and Chris Randle (8) chat on the sideline during the first half of pre-season CFL action against the Edmonton Eskimos in Winnipeg Friday, June 1, 2018. (THE CANADIAN PRESS/John Woods)

WINNIPEG — Adam Bighill thinks the timing is perfect for the Winnipeg Blue Bombers to have a big bounce-back game.

The Bombers (9-4) host the CFL-leading Hamilton Tiger-Cats (10-3) Friday and can make amends for giving up a 24-point lead in a loss to Montreal last weekend. It was the biggest blown lead in Bombers history.

“It doesn’t matter who we play next game, but, honestly, this is going to be a good test for us, coming right back after the Montreal game,” Bighill said Thursday after the star linebacker and his teammates finished their walk-through at IG Field.

The Bombers were dominating the Alouettes 34-10 late in the second quarter last Saturday and still held a 37-17 lead heading into the fourth. That’s when things unravelled, as Montreal added three more touchdowns and won 38-37 on a convert with six seconds left in the game.

The 24-point collapse erased the franchise’s previous mark of 20 points, which came earlier this season when the Bombers blew a 20-point lead in a loss to Toronto.

“I think guys did a great job of flushing that (Montreal) game, but also kind of keeping that motivation from losing a tough game like that and pushing us forward into this week and having a great week of preparation,” Bombers quarterback Chris Streveler said.

“We definitely learned from the film and had some major things to clean up and hopefully we can do that.”

Winnipeg has clinched a playoff spot, but has lost two of its past three games. Its 9-4 record is tied with Calgary, but the Bombers hold the top spot in the West Division because of their win over the Stampeders earlier this season.

Hamilton has lost only one of its past six games, a 19-18 defeat at the hands of Calgary on Sept. 14.

The Bombers and Ticats are tops in the league in two key categories.

Winnipeg is No. 1 for points scored with an average of 30.2 per game. Hamilton is second at 29.5. The Tiger-Cats have allowed the fewest points per game at 20.2 and Winnipeg is next at 20.5.

Ticats star linebacker Simoni Lawrence, meanwhile, was fined the league’s undisclosed maximum this week for his hit to the head and neck of Edmonton Eskimos quarterback Logan Kilgore last week. In Week 1, the league suspended Lawrence two games for a direct contact to the head of Saskatchewan quarterback Zach Collaros. His appeal was unsuccessful.

Streveler was asked if he’ll be thinking about Lawrence.

“Simoni Lawrence is a great player and plays hard, plays with passion,” Streveler said. “But, for me, it’s about seeing the entire defensive picture. He fits into there as well.

“I wouldn’t say I’m keying specifically on him on any plays, but it’s important to see everything in front of you as a quarterback and he’s obviously a good player.”

Bighill said Winnipeg’s defence will have to be on its toes for Hamilton’s diverse offence.

“They have some creativity mixed in their play calling so it’s not just what you see is what you get. They have a little bit of trickery,” Bighill said. “We’ve just got to be able to play by our rules and play disciplined.”

BACK IN ACTION: Bombers defensive lineman Jackson Jeffcoat returns after missing six games with a lower-body injury. Veteran running back Tyrell Sutton is expected to make his Hamilton debut after being signed to the club’s practice roster Sept. 9.

FINISHING STRONG: The Tiger-Cats have outscored their opponents 110-49 during the fourth quarter of their 10 victories.

REACHING FOR A RECORD: Bombers quarterback Chris Streveler has 12 rushing touchdowns this season, a Winnipeg record and two short of the CFL record for a QB. The mark of 14 was set in 1991 by Doug Flutie and tied last year by Toronto’s James Franklin.