Jurco, Bear with Two Goals Each as Oilers Beat Jets 5-3 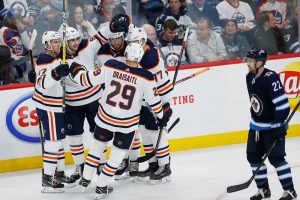 WINNIPEG — A little desperation went a long way Thursday night as the Edmonton Oilers turned around a game the Winnipeg Jets had dominated for two periods.

Tomas Jurco had a pair of goals, and Edmonton scored three times in the third period to come from behind and beat the Jets 5-3.

Ethan Bear tied the game in the third, then added an insurance goal with less than four minutes left.

“I had a little bit of energy left so I was just trying to empty the tank,” said the 22-year-old defenceman.

“I’m not going to get too excited or anything. I’ve still got a lot to work on as a player.”

Bear, who was born in Regina and raised on the Ochapowace First Nation, played 18 games with the Oilers in 2017-18 but has spent most of his time with the Bakersfield Condors of the AHL.

Meanwhile, Winnipeg coach Paul Maurice saw a lot he liked in the first two periods from some of his rookies, but the third period was a different picture entirely.

“We were OK through two periods . . . I think we hadn’t given up much at all,” Maurice said.

He said in the third, the Jets moved to the back end of the neutral zone and the Oilers played simple and started to get pucks through.

C.J. Suess, Tucker Poolman and Gabriel Bourque scored for the Jets, who led 3-2 after 40 minutes and had outshot the Oilers 18-11.

“It was just a sloppier third,” said Poolman.

Newcomers on both teams had ample opportunity to strut their stuff with the exhibition season nearing its end but costly penalties hurt the Jets. Winnipeg took four to Edmonton’s one and gave up two goals while shorthanded.

Suess scored his second of the pre-season in dramatic fashion midway through the first period to get things started.

A cross ice-pass from Joona Luoto jumped off Suess’ stick and he batted it past Oilers netminder Mike Smith before he could react at 10:07.

Suess played with Winnipeg’s AHL team last season and Luoto is an undrafted Finnish import who signed a three-year, entry-level deal. Luoto had plenty of ice time Thursday and showed speed and skill.

Jurco, signed by the Oilers this past summer, scored to even things up five minutes later. He was untouched directly in front of the Winnipeg net and one-timed a pass from James Neal through Connor Hellebuyck’s five-hole to make it 1-1.

“He understands how to play offence,” McDavid said of his new linemate.

McDavid gave the Oilers the lead in the second as he completed a quick series of passes from Jurco and Neal in front of Hellebuyck on a power play.

Hellebuyck hasn’t seen a lot of action in the pre-season but Winnipeg’s starting netminder played all three periods Thursday night. He finished with 21 saves.

Poolman evened things up at 4:34 when he cashed in on a rush to the net started by centre Mark Letestu. It was Poolman’s third of the pre-season.

With Jacob Trouba gone and Dustin Byfuglien’s future with the Jets uncertain, there are big holes on defence to fill.

Bourque made it 3-2 for the Jets at 8:05 when he finished off a Mathieu Perreault attempt.

But Bear tied things up again at the 5:46 mark of the third after a review showed the puck had entered the Winnipeg net.

Then Jurco shouldered his way to the net beside Jets defenceman Dmitry Kulikov for his second of the game on a power play, followed by Bear’s second at 16:14.

The Jets close their exhibition season Sunday in Minnesota. They play five of their first six regular-season games away from Bell MTS Place.