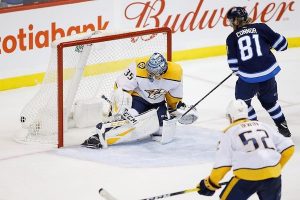 WINNIPEG — The Winnipeg Jets have solidified their roster in time for the regular season by re-signing their last key restricted free agent.

The Jets announced on Saturday that they have signed forward Kyle Connor to a seven-year, $50-million deal — one day after inking fellow RFA Patrik Laine to a new contract.

The 22-year-old Connor was the final player general manager Kevin Cheveldayoff needed to get under contract after Laine committed to a two-year contract worth $13.5-million on Friday.

Connor, from Shelby Township, Mich., was second on the team in goals with 34 and third in points with 66 in 2018-19, both career-highs while playing his second full season.

Connor was originally drafted 17th overall by the Jets in 2015.

The Jets’ season opener is Thursday in New York against the Rangers.

#NHLJets have agreed to terms with forward Kyle Connor on a seven-year contract with an average annual value of $7.14 million.