Manitoba Politicians to Head Back to Legislature to Pass Budget 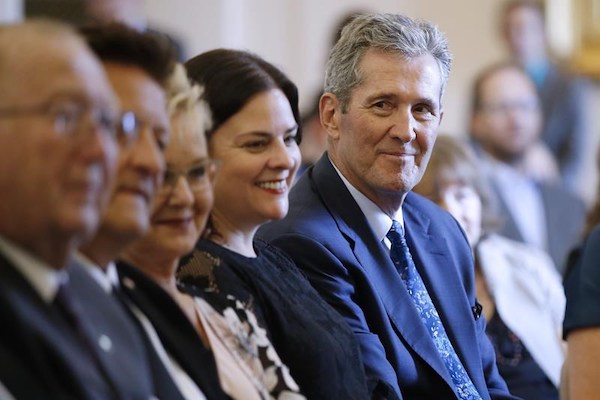 Premier Brian Pallister looks at some of his new provincial MLAs who were sworn into the Manitoba legislature in Winnipeg on September 25, 2019. (THE CANADIAN PRESS/John Woods)

WINNIPEG — Manitoba politicians returned to the legislature Monday for the first time since the provincial election three weeks ago to start an abbreviated two-week sitting that is to focus primarily on passing last spring’s budget.

The Progressive Conservatives laid out their plans in the briefest Manitoba throne speech in recent memory — a little over two pages long. It highlighted the government’s cut to the provincial sales tax earlier this year and focused on the budget that was left hanging by the summer election campaign.

“In the coming days, this assembly will be asked to complete all necessary legislative requirements in order to fully implement the measures outlined in Budget 2019,” said the throne speech read by Chief Justice Richard Chartier of the Manitoba Court of Appeal.

The speech also promised to tackle addictions and crime, as well as to improve health care and education. It offered no details.

Throne speeches are normally read by the lieutenant-governor but Janice Filmon, who has held the role since 2015, underwent surgery for breast cancer Monday. Her office would not provide details on her condition other than to say in a written statement that she was “resting comfortably.”

The Tories won their second-straight majority mandate on Sept. 10 with 36 of the legislature’s 57 seats, down from a historic high of 40 in the last election. The NDP gained a handful of seats to reach 18, while the Liberals secured only three.

Premier Brian Pallister, who has cut the deficit by more than half since 2016 through measures that include Crown corporation job cuts and a wage freeze for some public-sector workers, said the fiscal restraint will continue.

“I don’t think the job’s over. I think the job is just beginning of fixing our financial situation,” he said.

Opposition NDP Leader Wab Kinew said the throne speech failed to put forward solutions for problems such as the growing use of methamphetamines and climate change.

“Just a few days ago, we had 12,000 young people saying we need to take action on climate change,” Kinew said, referring to a climate rally on Friday in Winnipeg, one of many held around the world.

“This government did not mention climate change in the throne speech.”

The New Democrats have agreed to let the budget pass by the end of the sitting on Oct. 11. They say they are looking forward to question period and grilling the government on its health-care reforms and other issues.

The Liberals, having lost party status and the funding that comes with it, have had to scale back their operations.

“We have to move offices. We lost some staff. But ultimately we keep on doing everything we were doing before,” leader Dougald Lamont said.

The first matter of business Monday was the election of a Speaker to enforce rules of the legislature and oversee question period.