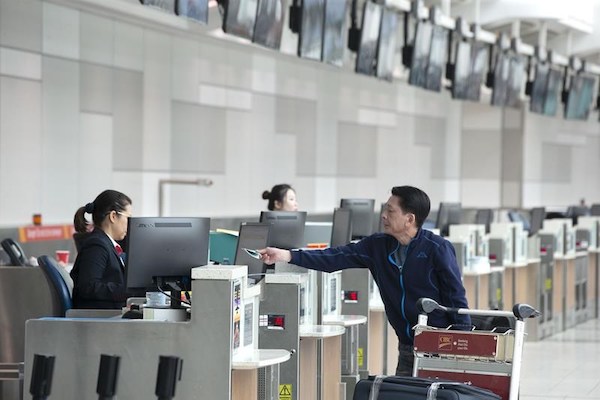 A passenger is seen at the check-in desk at the departure terminal at Toronto Pearson Airport, in Mississauga, Ont., Friday, May 24, 2019. (THE CANADIAN PRESS/Chris Young)

The operator of Toronto’s Pearson International Airport says it has agreed to test the new system developed at an Ivy League American university and marketed by a B.C. company.

Vancouver-based Liberty Defense Holdings Ltd. says the technology, known as Hexwave, can detect both metallic and non-metallic weapons ranging from guns and knives to explosives.

It operates by capturing radar images, then using artificial intelligence to analyze those images for signs of a weapon concealed in bags or under clothing.

Liberty says the technology is not able to recognize facial features and therefore does not pose a privacy risk, a position experts in the field view with some skepticism.

The Greater Toronto Airports Authority, which operates Pearson, says it will start deploying the technology in the spring of 2020 in a bid to boost security.

“They were trying something that could give us a more definitive look at weapons and plastic explosives that may be coming into airports,” Dwayne MacIntosh, director of corporate safety and security for the authority, said in a telephone interview. “When I saw this opportunity, I felt that we had to be part of it.”

MacIntosh said exact plans for the pilot project are still underway, but said Hexwave units will be deployed just outside airport terminals in order to pick up on potential threats before they get inside.

One of the system’s benefits, he said, is that it can be integrated with other airport security features and trigger responses based on what it picks up. Detection of certain weapons, for instance, could automatically trigger doors to lock or sound specific alarms.

The Hexwave technology traces its origins back to the Massachusetts Institute of Technology, where the antenna array and transceiver were developed.

Liberty devised its weapons-detection product after acquiring the licensing rights from MIT, according to CEO Bill Riker.

The system is still being evaluated in the company’s lab, but the next phase of testing will take place in public settings beginning next spring. Pearson airport is not the only location — the Metro Toronto Convention Centre has also signed on as a test site.

Riker said Hexwave works by capturing a 3D radar image that is then subjected to scrutiny from a program that has been trained to recognize a wide variety of weapons.

Riker said Hexwave does not feature cameras and does not have the capacity to capture images of people’s faces.

“Radar … essentially is emitting this form of energy, it’s reflecting off a person and it’s identifying any items on a person’s body that don’t belong on a body,” he said.

Hexwave is designed for use in crowded environments, Riker said, noting the process of capturing and analyzing a radar image takes less than a quarter of a second.

Riker touted the system’s ability to detect both metallic and non-metallic components as one of it’s greatest advantages, noting items such as ceramic knives and plastic explosives have historically posed more of a challenge for security screeners.

MacIntosh agreed, noting the technology will also provide airport staff with a higher level of detail about potential threats.

He said privacy was a key issue when discussing whether or not to proceed with the project, adding he’s satisfied that Hexwave is not intrusive and poses no real privacy risks.

Those with expertise in the field take a more cautious view.

Former Ontario privacy commissioner Ann Cavoukian said that while Hexwave stands to serves a valuable purpose and the company’s descriptions of the system are encouraging, she would want to see the technology subjected to an independent privacy audit to ensure that the radar lacks the capacity to capture or store identifying information.

Cynthia Khoo, a research fellow at the Citizen Lab and a lawyer specializing in technology and human rights, said concerns always arise when private enterprise gets involved in security of public spaces.

She noted that the use of proprietary technology generally results in less transparency around the process. Private companies and public agencies are also held to different privacy standards, she added.

Still more worrisome, she said, is the potential negative impact of allowing another surveillance tool into society.

“Research has shown that when people believe or know they are being surveilled, whether they are or not, that alone can have a chilling effect on, for example, the ability to exercise their right to freedom of expression, and result in self-censorship or lesser participation in public life and political issues,” she said.