Winnipeg Jets Shift Pieces Around Ahead of Season Opener 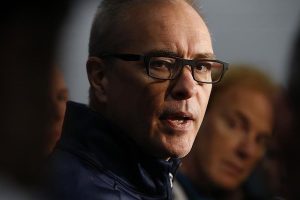 WINNIPEG — It seems fitting the Winnipeg Jets will play their season opener just off Broadway.

When the Jets begin a four-game road swing Thursday against the New York Rangers, their roster will feature some new cast members and others playing different roles.

The changes came about because of departures, late arrivals to training camp, injuries and the continued personal leave of absence of veteran defenceman Dustin Byfuglien.

Nikolaj Ehlers knows his job on the team’s top line with centre Mark Scheifele and captain Blake Wheeler is his to lose.

“There’s a lot of work that needs to be done from my side to be able to stay there and continue to get better personally,” Ehlers said after Wednesday’s practice.

“So it’s a good challenge for me to play with those two and I’m going to go out there and do my best and, hopefully, do well.”

The winger has skated with Scheifele and Wheeler in the past, but that coveted spot has also been filled by Kyle Connor and Patrik Laine.

Connor and Laine arrived in Winnipeg last Sunday after the former restricted free agents inked new contracts. They have had only two practices with the group.

The pair of goal scorers start the season on a line centred by Andrew Copp, who’s taking on that role as veteran centre Bryan Little is in concussion protocol after being injured in last Sunday’s exhibition win over Minnesota.

Ehlers had 21 goals and 37 points in 62 games last season, often skating with Little and Laine.

Head coach Paul Maurice said Ehlers has the skill-set and speed to fit on the top line.

“It’s worked,” he said. “He can play at the pace of that line, that’s a piece of it. Those are the two guys, man, they can move.

“We’ve liked the times that he’s played there. We need to see enough of it early that we have a faith that it would continue.”

Some of the new players to crack the lineup include prospects such as Swedish forward David Gustafsson, 19, and 18-year-old Finnish defenceman Ville Heinola.

Maurice said he’s looking forward to seeing how the current roster shakes out now that the games count.

“That never changes,” he said of ongoing evaluation. “If your group comes back the same, you’re moving people around based on who’s improved, who’s struggling …

“Other than the normal evaluation, I’m certainly looking forward to it. At least we’ve got something to talk about in the non-hypothetical.”

Winnipeg’s defence has seen the most change. Aside from Byfuglien’s absence, top-pairing defenceman Jacob Trouba was traded to the Rangers for fellow blue-liner Neal Pionk, while veterans Tyler Myers and Ben Chiarot left through free agency.

Defenceman Josh Morrissey, who became an alternate captain this week, was in a top pair at Wednesday’s practice with returning veteran Dmitry Kulikov.

“It’s a great group,” Pionk said of his new team. “For myself as a new guy coming in, really welcoming and a lot of fun and a highly talented group, too, so I’m looking forward to the year.”

Ehlers is also excited about where the team is at as it tries to rebound from a poor second half last season and a loss to St. Louis in the first round of the playoffs.

“We’ve obviously got a younger team than we had last year,” Ehlers said. “The new guys have come in and shown that they belong here.

“We obviously need everyone in this room to take a step up from last year. We’re ready for this challenge, we’re excited for it.”