Home » The Canadian Press » Law Will Be Changed If Needed to Cover Edibles, Manitoba Premier Says

Law Will Be Changed If Needed to Cover Edibles, Manitoba Premier Says 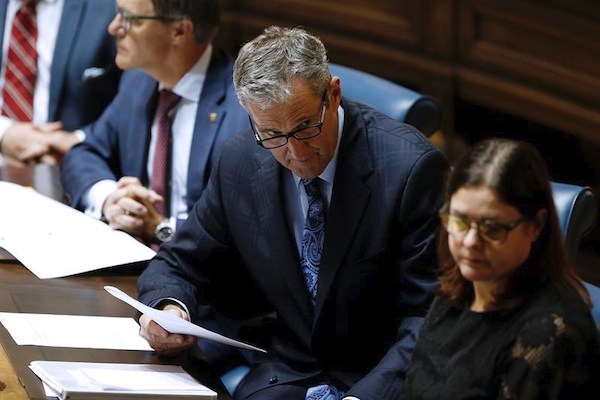 Manitoba Premier Brian Pallister talks to ministers after the reading of the Speech from the Throne at the Manitoba Legislature in Winnipeg, Monday, September 30, 2019. (THE CANADIAN PRESS/John Woods)

WINNIPEG — Manitoba will ban the public consumption of cannabis in all its forms, even if changes are needed to provincial law, Premier Brian Pallister said Friday.

“We’ll have to look, probably, at the wording through an amendment if necessary,” Pallister said.

“But the intention of the law is … that we’re making illegal the public consumption of goods whether smoking, as smoking is illegal now … but also on the consumption of edible products.”

Most provinces already have strict rules on where cannabis can be consumed in any form, but Manitoba’s cannabis law was written specific to smoking and vaping.

Even the province’s public awareness campaigns are targeted. They remind people smoking or vaping are illegal in almost all public areas including parks, streets and beaches, and offenders face fines of $672.

The law’s wording does not cover oils, capsules and other non-smoking items that have been sold at government-licensed stores since recreational pot was legalized by the federal government last October.

Sales of edible products such as cannabis-infused chocolate are scheduled to start later this year, so Pallister wants to ensure the provincial law is broad enough to cover all forms of cannabis.

“I’m told by the clerk of the executive council that discussion is underway already as to what is necessary.”

Opposition NDP Leader Wab Kinew said people who use cannabis without smoking it should get a break.

“There can be flexibility when it comes to edibles because they’re a bit different than when you smoke weed,” Kinew said.

“The difference is there’s not the second-hand smoke harming another person.”

Kinew added that there are some locations, such as schools and playgrounds, where an all-encompassing ban is needed to protect children.

Manitoba has specified three areas where any form of cannabis consumption is forbidden — schools, vehicles and boats.

The province has also banned people from growing their own cannabis at home, which overrides a federal law that allows four plants per residence. A similar law in Quebec was struck down by a Superior Court justice last month as unconstitutional. The judge said it infringed on the federal government’s jurisdiction.