Home » Columns » Can’t Have It Both Ways: Jackman-Atkinson

Can’t Have It Both Ways: Jackman-Atkinson 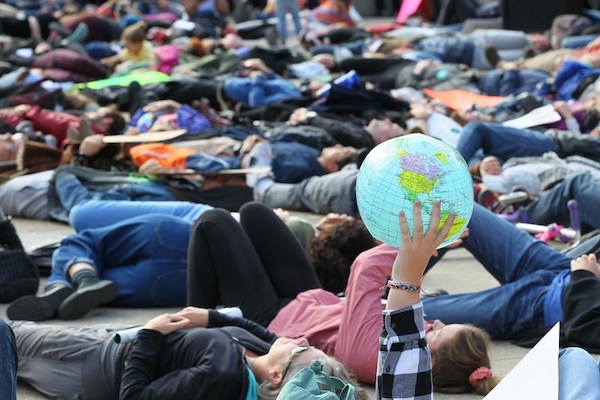 Climate change activists and students gather for a protest and “die-in” on the steps of the Calgary Municipal Building in Calgary on Friday, Sept. 20, 2019. (THE CANADIAN PRESS/Dave Chidley)

Across our communities, we wonder why young people aren’t getting more involved. Last week, I saw why. On Friday, youth across the world took part in a climate strike. I’ll be honest, I wasn’t following it very closely, but I was bombarded by examples of adults acting like children. In posts, comments and memes, I saw adults mocking the young participants, telling them they were wasting their time, telling them all the other things they should be doing, accusing them of not being committed to the cause because they own a cell phone or buy new clothes.

It was a pretty depressing weekend on social media.

Youth protesting for change has been a part of growing up in the developed world for most of the last century. Youth have probably been protesting for change even at times when to do so was punishable by death. Those living today protested against wars, they protested against totalitarian regimes by going to war, they marched in the streets for civil rights and gender equality. They skipped school to go to rock concerts. I’m sure their parents and grandparents thought they were wrong, wasting their time and didn’t understand the nuances or realities of what they were protesting.

The difference was that back then, a bunch of strangers weren’t calling you names online.

This isn’t a column about climate change or what governments should be doing. This is a column about what we need to do if we want our communities to survive.

It seems that when people aren’t complaining about youth getting involved, they’re complaining about them being self-involved, worried only about social media and the latest iPhone. It can’t be both ways, we can’t both chastise youth for not being involved and too involved. When we tell kids to care about the broader community, the world beyond themselves, we can’t mock them when they do. Our backgrounds, experiences and interests mean we all care about different issues.

I frequently hear concern about the lack of new people getting involved in community organizations and boards. People wonder how our communities’ organizations will continue without new blood and energy. We struggle to fill the seats for school boards and municipal councils. It’s a lucky organization that isn’t actively looking for a few more helping hands.

If I were a young person looking to get involved in the community, what have I seen over the last week? I have seen repeated again and again the message that I’m not worthy because I’m not flawless; that unless I’m 110 percent in, I’m not devoted enough to push for something I care about. I’ve been told that I can’t care about the environment because I have a cell phone, that I can’t want to clean up waterways because I haven’t cleaned the house. How many of us adults are held to these standards? We’ve shown youth that people won’t engage on issues, they’ll mock them for being young and naive and passionate. Who would want to step up and get involved?

I’m not saying that youth should make all the decisions or that we shouldn’t help educate them about the things they don’t know or understand, but we should be engaging in ideas, education and sharing information between generations on a personal basis, not anonymously mocking online. Today’s youth will spend much longer living with our decisions and at least recognizing that would be a good start.

We live in a free society and can’t tell others what they should care about. Would we rather our youth cared only about the latest outfit, tech gadget or celebrity du jour? I wouldn’t.

← Previous: Woman Hit and Killed by Truck in Berens River Next: WSO Encouraging Patrons to Use Smartphones to Further Engage in Concerts →
Tags: Green | Manitoba