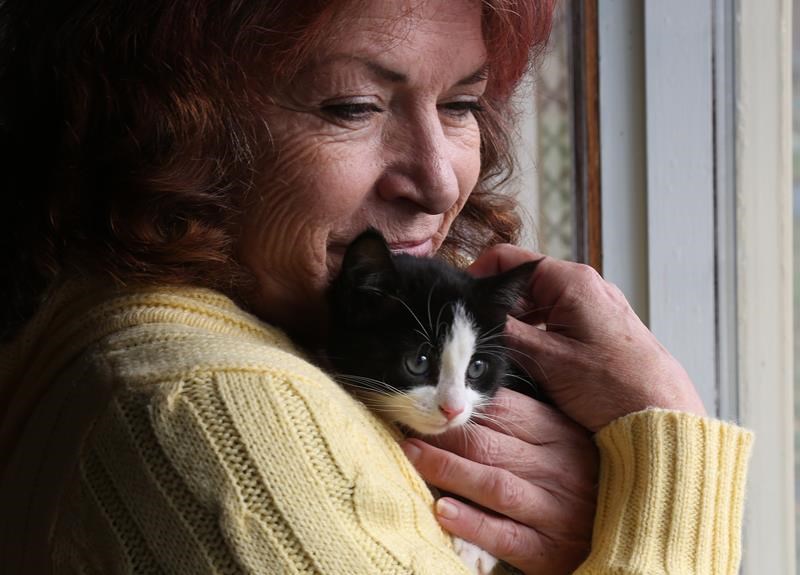 Carol Hull holds a feral kitten she rescued, at her home in Little Bay Islands, N.L, on Friday, November 15, 2019. Cat lovers across Atlantic Canada fighting for the future of wandering feral cats in a soon-to-be empty town as Newfoundland and Labrador’s government proposes euthanizing the animals. (THE CANADIAN PRESS/Paul Daly)

ST. JOHN’S, N.L. — Cat lovers across Atlantic Canada are rallying to save feral felines in a Newfoundland town that will soon be abandoned, as the provincial government backs down from a plan to euthanize the animals.

Human residents of Little Bay Islands are scheduled to leave by the end of the month, leaving dozens of feral cats without the assistance they need to survive.

Carol Hull, a local advocate who has tended to the cats for years, said the colony has grown too large for her to adopt or re-home by herself.

“He loves Little Bay Islands; he doesn’t even want to leave,” Hull said while holding a jet-black kitten during a recent interview at her home off Newfoundland’s Notre Dame Bay.

Like many small outports in the province, Little Bay Islands’ population has dwindled over the years, with some owners leaving their pets behind. The animals have procreated and formed a roaming band that Hull estimates at about 40 animals, wandering among the empty homes and approaching residents for food.

Faced with a drastically reduced population, residents of the island town voted to relocate earlier this year. The provincial government is preparing to shut down services and will stop running ferries after this month.

With the cats’ future in limbo and no formal plan in place, rescue groups from neighbouring Nova Scotia have stepped in to offer their services.

Sonya Higgins with Nova Scotia rescue group Healing Animal SCARS said volunteers are willing to travel and help local rescue groups trap the cats — but plans are on hold until they hear from the Newfoundland and Labrador government.

“As a cat rescuer, I don’t believe cats have geographical boundaries,” Higgins said from Dartmouth.

“I’m tempted to go over and move on that island myself, and live there and feed the cats.”

Higgins, who grew up in Corner Brook on Newfoundland’s west coast, said she was moved by the plight of the animals in her home province. She devised a plan with charity Spay Day Nova Scotia to send in reinforcements.

“No one rescue group would have been equipped to take it on themselves,” she said. “We don’t want the cats to freeze to death and I believe every cat deserves a chance, whether they’re feral or not.”

Higgins contacted her network of animal rescuers in both provinces to co-ordinate the mission. She said experienced trappers from Nova Scotia are ready to make the trip to Little Bay Islands to help round up the cats.

The felines will then take a ferry trip with their rescuers back to Nova Scotia, where Higgins said they will be housed and potentially adopted. Those that are too feral to be domesticated can be re-homed as barn cats, a program Higgins’ group co-ordinates.

While the rescue mission was being hatched — including through a Facebook group with over 700 members as of Wednesday — Newfoundland and Labrador’s provincial government announced, then retracted, its own plans for the cats.

The Department of Fisheries and Land Resources said Tuesday it was working with a veterinarian to assess and trap the cats, saying some would be brought to shelters and others would be euthanized if necessary.

By the end of the day, though, the government issued a second statement saying the vet had resigned from the job and was unlikely to be replaced, advising people against taking in feral cats that are “not suitable for adoption.”

In a statement to The Canadian Press on Wednesday, the department said it’s “regrettable” that the veterinarian withdrew following social media backlash to the plan. While the department is open to candidates, it said it will not get in the way as volunteers step in.

“Individuals opposed to the province’s intended response have established their own plan for dealing with the feral cats,” the statement said. “Veterinarians with the Animal Health Division do not endorse this plan, but will be monitoring the situation with the hope that it is successful.”

Higgins, for her part, said the fate of the Little Bay Islands cats speaks to the importance of neutering cats to prevent similar situations — but she firmly believes than euthanizing is not the answer.

“No cat shall be left behind,” she said.