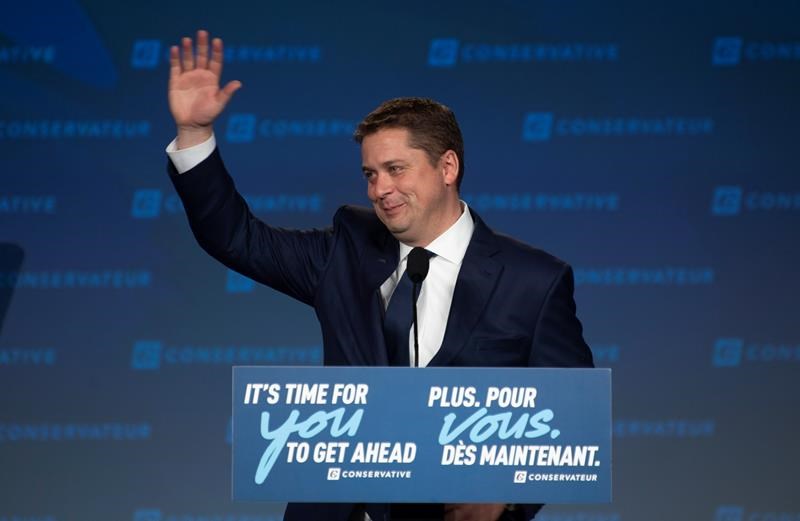 OTTAWA — After rejecting calls for his resignation from within his party for weeks, federal Conservative Leader Andrew Scheer announced Thursday that he will step down as soon as his party chooses a successor.

“Serving as the leader of the party that I love so much has been the opportunity and the challenge of a lifetime,” Scheer said Thursday in the House of Commons, “and this was not a decision I came to lightly.”

The decision comes less than two months after a disappointing election result for the Conservatives, in which they couldn’t capitalize on the governing Liberals’ ethics record and a stunning mid-campaign revelation that Prime Minister Justin Trudeau had repeatedly dressed up in blackface and brownface as a younger man. The Liberals were reduced to a minority in the House of Commons but held on to power.

On Thursday, Scheer said he was proud of his time as leader, noting there are more Conservative MPs than there were before the Oct. 21 election.

“We kept our party united and strong,” he said. “We knocked the Liberals down to a minority. We increased seats all over this country.”

Still, he said he is stepping down because he can no longer give it his all.

“In order to chart the course ahead, this party, this movement, needs someone who can give 100 per cent to the efforts,” he said, adding that he had decided it was time to put his family first.

Scheer said he would ask the national council of the Conservative Party of Canada to begin a leadership contest.

Dustin van Vugt, the executive director of the Conservative party, said Scheer made up his mind to resign after having “long and hard conversations with friends and family” over several weeks, and that he began to let his staff know earlier this week.

He also shed light on how the party had helped Scheer with the cost of moving his family from Regina to Ottawa once he became leader.

“Shortly after Mr. Scheer was elected leader, we had a meeting where I made a standard offer to cover the costs associated with moving his family from Regina to Ottawa,” van Vugt wrote in a statement Thursday.

“This includes a differential in schooling costs between Regina and Ottawa. All proper procedures were followed and signed off on by the appropriate people.”

Scheer was emotional in his seven-minute speech to the House of Commons, interrupted multiple times by applause and standing ovations from his caucus. His wife Jill was in the gallery watching.

Scheer said he plans to remain as Conservative leader until his successor is chosen rather than giving way to an interim leader. He also plans to stay on as the MP for Regina-Qu’Appelle, the Saskatchewan riding he has represented since he was first elected in 2004.

He said he had a message for his fellow Conservatives as they head into the leadership race: “Let’s stay united.”

Scheer was elected as the Tory leader in May 2017, barely besting Maxime Bernier in the contest after numerous rounds of voting.

Bernier ultimately quit the party and founded his own People’s Party of Canada. He lost his seat in the October election but spent a year harrying Conservatives from the right for being too much like Liberals.

Scheer said he would stand behind whoever wins.

“That person will have my 100 per cent support,” he said.

Scheer also said the Liberals should not expect to benefit from facing an outgoing leader of the Opposition.

“During this leadership election there will be no free rides in the House of Commons,” he said.

“We are going to continue to be here every single day to represent our constituents, perform our duties as parliamentarians, put Canadians and Canada first,” he said.

Trudeau responded by saying he and Scheer, as well as the other parents in the House, share the goal of wanting to improve things for their children.

“We are politicians, we are in this House not in spite of having kids but because we have kids and are dedicated to building a better world for them with everything we have. And I respect that deeply in him,” Trudeau said.

He said few know the challenges and rewards of leading a diverse party like the Conservatives or the Liberals.

Trudeau concluded by thanking Scheer “deeply for his service to Canada.”

New Democrat Leader Jagmeet Singh said he wanted to acknowledge the “hard work” that Scheer has put into his various roles. Before leading the Conservatives, Scheer was Speaker of the House of Commons, the youngest person to hold the post.

“I think we speak as a united voice in acknowledging that and thank you for your service,” Singh said.

Ontario Premier Doug Ford thanked Scheer for his work as leader of the federal Conservatives.

“I wish Andrew Scheer all the best as he undertakes this new chapter in his life, and thank him for his service as the head of Her Majesty’s Loyal Opposition and leader of the Conservative party,” Ford said in a statement.

Several prominent Conservatives in the past few weeks have called outright for Scheer’s resignation, or for him to re-apply for his job in a new leadership contest. Having not won power in October, he faced a mandatory leadership review in April.

The party has asked former Conservative cabinet minister John Baird to conduct a review of the election.

On Thursday, Baird said that work is not yet finished.

“I look forward to writing and then submitting my report when it is complete,” he wrote in a message posted to Twitter, where he also thanked Scheer for his service as leader. “I hope it will inform our party’s next campaign and provide advice to whomever the (Conservative party) membership select as leader.”