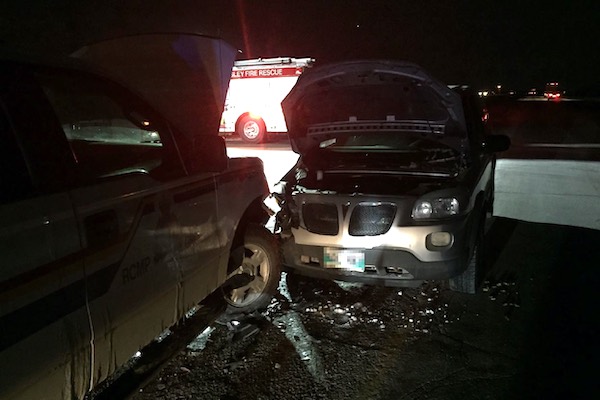 A minivan drove into a marked RCMP truck while travelling the wrong direction on Highway 1 near Elie on Wednesday night. (RCMP HANDOUT)

A minivan travelling east in the westbound lanes of Highway 1 near Elie collided with an RCMP vehicle attempting to stop it Wednesday night.

Mounties with the Headingley detachment received tips from witnesses at around 9 p.m. that the minivan had nearly struck several vehicles on Highway 1.

Officers attempted to stop the vehicle, which kept travelling up the highway. Police blocked the westbound lanes of traffic with a marked police truck, but the suspect drove directly into it.

The 84-year-old Winnipeg driver of the minivan, along with the 44-year-old RCMP officer in the truck, were taken to hospital with minor injuries.

Charges are pending and RCMP continue to investigate.