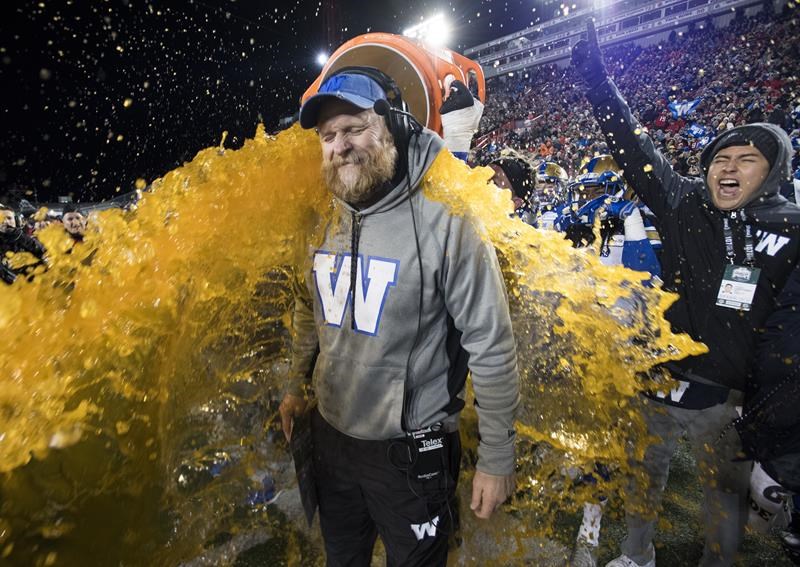 Winnipeg Blue Bombers head coach Mike O’Shea gets a sports drink poured over him as his team defeats the Hamilton Tiger-Cats in the 107th Grey Cup in Calgary, Alta., Sunday, November 24, 2019. (THE CANADIAN PRESS/Frank Gunn)

The Winnipeg Blue Bombers have made it official and extended the contracts of head coach Mike O’Shea and general manager Kyle Walters.

What seemed like an obvious choice after the Blue Bombers won the Grey Cup in November, O’Shea will return through the 2022 season.

Walters had one year remaining on his existing contract, but has been extended through 2023.

“We’re thrilled to have Kyle and Mike remain at the helm of our football team for the next few seasons,” said Wade Miller, Bombers president and CEO.

“Continuity in our football operations department is critical as Kyle and Mike continue to build a strong culture in and around our locker room.”

O’Shea is the league’s longest-tenured head coach, having served in the role since being named the Bombers’ 30th head coach on December 4, 2013. Walters was named the 17th GM in Bombers history on November 26, 2013.

“When Kyle, Mike and I began this journey in 2013, I stated that we would build a winning and sustainable organization,” added Miller. “Kyle and Mike have been the drivers of this success and have helped establish a championship formula.”

The Bombers finished third in the West Division this year with an 11-7 record.

“We have a group up here that’s wired similarly,” O’Shea said. “We have the same passion.

“We have different roles, but we respect each other roles and we’ve figured out a way to keep evolving in how we work together to make sure that we can add the ‘s’ onto this championship.”

“It got worked out, I thought, in a very timely manner,” O’Shea said of his new contract. “I think both sides are pretty happy.”

He’s now working on who’ll replace LaPolice – Bombers quarterbacks coach Buck Pierce is a favoured choice – and which other coaches will remain on staff.

“As our leadership has shown, continuity is very important,” O’Shea said, only adding he’ll decide if interviews for an offensive co-ordinator are part of the process.

Once the coaching staff is in place, the focus will shift to signing quarterbacks.