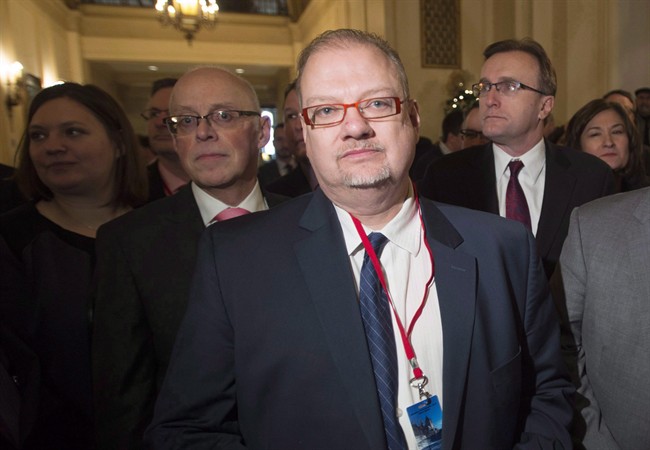 Manitoba Health Minister Kelvin Goertzen and other provincial health ministers wait to speak as a group before a meeting with the federal finance and health ministers in Ottawa, Monday, December 19, 2016. (THE CANADIAN PRESS/Adrian Wyld)

WINNIPEG — A Manitoba union accused by the governing Progressive Conservative party of breaking an election advertising limit has filed paperwork that says its spending was well within the law.

Unifor has filed a financial report with Elections Manitoba, as all third-party advertisers are required to do after each election.

Unifor says it spent just under $19,000 during the four-week Manitoba election campaign that ended Sept. 10 — well under the legal limit of $25,000.

Cabinet minister Kelvin Goertzen accused Unifor in August of over-spending, when he noticed several billboards, bus-shelter ads and brochures the union had produced that criticized the government.

The Progressive Conservatives quickly filed a complaint with the provincial election commissioner, and that investigation is ongoing.

Unifor denied the accusation from the start, and both sides say they will not comment further until the investigation is complete.

The Canadian Union of Public Employees also registered as a third-party advertiser and its financial results were not available Friday.

Provincial elections commissioner Bill Bowles does not comment on complaints or ongoing investigations.