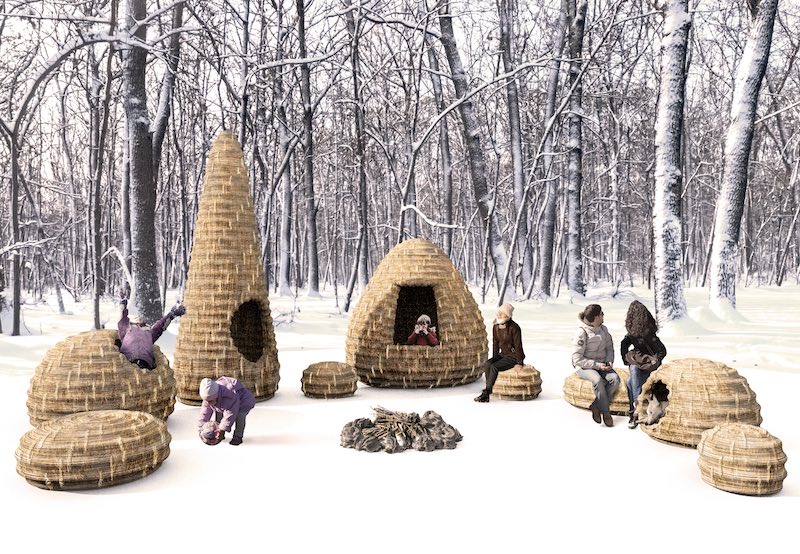 WINNIPEG — Artists from around the globe have been chosen to craft architectural masterpieces as part of the 10th annual Warming Huts competition.

The winners were revealed Friday at The Forks as selected by a blind jury, consisting of arts and architecture experts.

“The Warming Huts competition — which started out totally organically with the creative community right here in Winnipeg — continues to attract fantastic art and architecture to our community,” said Paul Jordan, CEO of The Forks Renewal Corporation.

“This year we have winners from Canada, France and Japan, and our invited artist is from right here at home — which coincides really nicely with the celebrations of our newest winter programming supporter, Manitoba 150.” 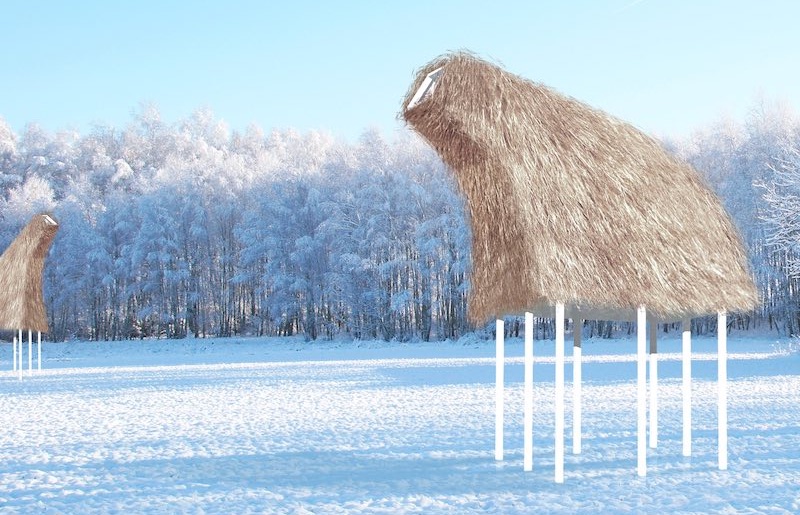 The Droombok is a warming hut designed by Noël Picaper, Onomiau (Office for Nomadic Architecture)
from Paris, Strasbourg, France. (HANDOUT)

“We created a space in which the surrounding nature finds its way inside. Thanks to its bestial outline and its scale, the structure’s relation with its context, is in constant change: the sun produces a layer of moving shadows, breezes enter freely and the snow is softly reflecting the environment on its (thatch) fur. As we get closer to it, other modes of reading emerge. Inside its belly, a landscape of white sculptures appears.”

“Warmth comes from being together. Enjoying time with other people is something we do less and less, because of the daily hectic. Let’s gather at this natural place, spend time and listen to each other. It is warm and silent inside the huts made out of straw.” 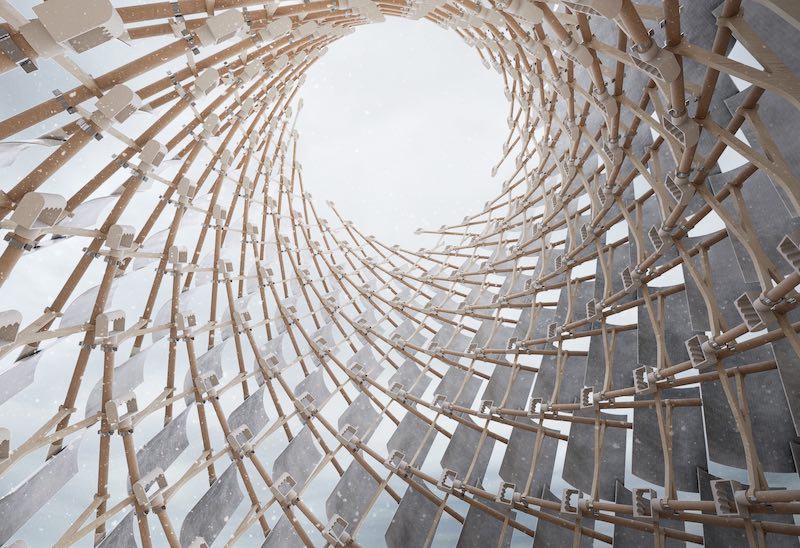 “Conceived as a small shelter or hovel, S(hovel) reimagines an everyday, off-the-shelf article of winter — the snow shovel — into a swirling vortex of mystery and intrigue that only reveals its true identity upon closer inspection and inhabitation. Built from 194 aluminum shovels, 195 custom milled plywood ‘X’ and ‘Y’ struts and 735 clamps, we challenged ourselves to design a warming hut that could be built and subsequently disassembled using unskilled labour furnished with only a wrench and a hand drill!”

An addition by the Manitoba Building Trades + Mistecture Architecture and Interiors Inc. 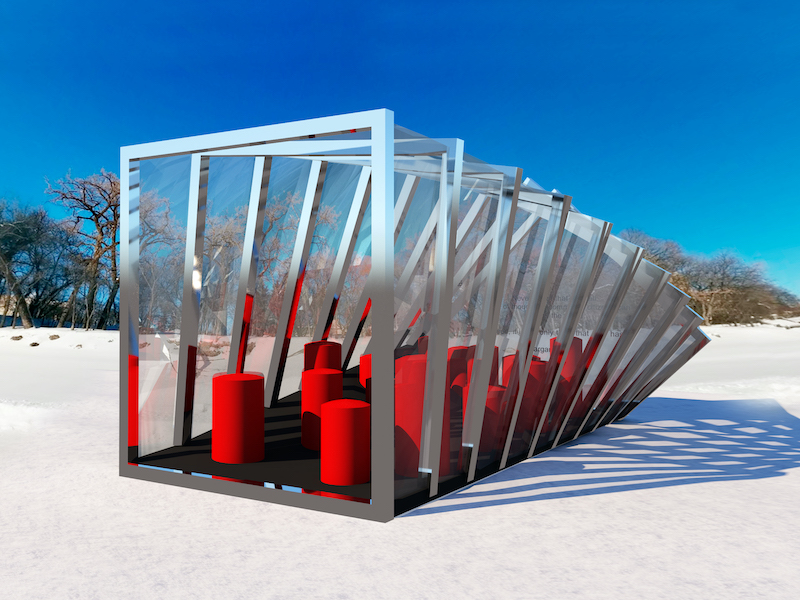 THE STAND is an addition by the Manitoba Building Trades + Mistecture Architecture and Interiors Inc. (HANDOUT)

“The Stand tells the story of what can happen when we have the courage to join together for what is right, no matter our background or occupation. The Stand was inspired by the people that stood up and rejected the status quo during the 1919 Winnipeg General Strike.”

The judges also chose an entry from the University of Manitoba Faculty of Architecture. While no name or rendering was available for publication, the hut will be part of a collaboration with Winnipeg artist Eleanor Bond.

Winnipeg indie band Royal Canoe has been invited for a special icy performance on January 31. The band will play on instruments carved from blocks of ice pulled from Winnipeg’s Red River.

“Next year, 2020, is a big Manitoba celebration of our province’s 150th anniversary, so on that theme, a special icy performance by local band Royal Canoe will be our invited artist this year,” says Jordan. 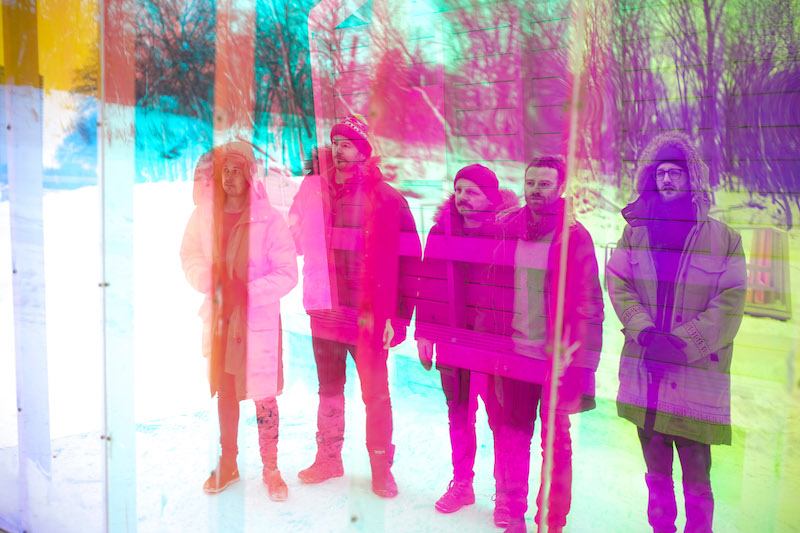 Royal Canoe will play a free outdoor concert on ice January 31, using instruments crafted from blocks of ice pulled out of the Red River. (HANDOUT)

“The band will be working with internationally renowned ice architect Luca Roncoroni and Sputnik Architecture to put on a really unique performance outdoors in the elements, using a number of instruments constructed out of ice.”

While the river trail’s existence this year is uncertain due to rising river levels in the fall, the trail already has a new name.

In celebration of Manitoba 150, the MB150 River Trail will hopefully be ready for skaters and winter enthusiasts if Mother Nature decides to cooperate. Officials with The Forks say, if that’s not the case, the warming huts will be assembled on land throughout the 52-acre site to join several favourite huts from previous years. Weathermen, Hygge, Golden Bison and Hug Mug — four past winners — will be displayed Saturday during the Illuminate 150 event at the Manitoba legislature.