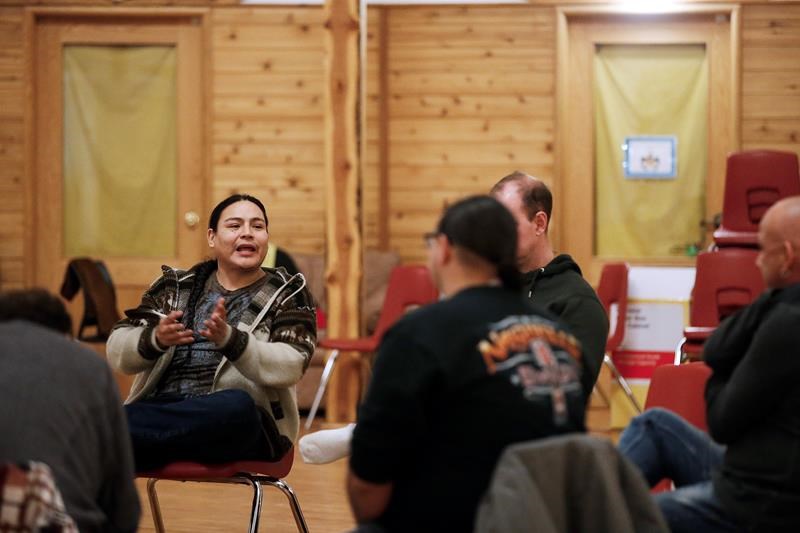 Ryan Beardy, former gang member and Healing Together founder, holds an eagle feather as he speaks during a meeting of Healing Together in Thunderbird House in downtown Winnipeg, Sunday, Dec. 8, 2019. (THE CANADIAN PRESS/John Woods)

WINNIPEG — A recent spike in violent crime in Manitoba’s capital has been at the centre of conversations by men who get together in the downtown core each week.

He says he formed the group so men in Winnipeg would have a place where they could feel safe to share their feelings and to support each other towards a healthier life. Many of them talk about how they’ve been involved with gangs and drugs in the past. Now, Beardy says, they discuss how to be better men, fathers and community members.

Beardy, 35, spent about 20 years in and out of the justice system.

His offences as a kid, such as stealing because he needed food, grew out of opportunity and poverty. He later got into drug- and gang-related crimes.

Since his last stint in prison about three years ago, he’s gone back to university, become a community advocate and is on the board of directors of the John Howard Society of Manitoba. He is also an outreach worker at Gang Action Interagency Network.

Beardy says most of Winnipeg’s crime is linked to poverty, addictions and First Nations intergenerational trauma from colonization and residential schools.

Young men and women involved in gangs are looking for support they can’t find in the community, he adds.

Beardy’s story is like that of a lot of the men at Healing Together. Most are open about how their struggles led them to crime and how difficult it has been to turn their lives around without enough resources to tackle addictions or escape gangs.

But they did it — or are actively trying, Beardy says.

The men want safer streets for their own children and know that policing alone cannot be the answer.

“We should be talking about all the root causes,” Beardy says.

There have been 41 homicides in Winnipeg so far this year — 12 of them came in just over 30 days. The total matches the 2011 number of most murders in a single year.

One of the most recent was the death of three-year-old Hunter Haze Straight-Smith, who was stabbed multiple times as he slept in his bed. His mother’s on-again-off-again boyfriend has been charged with second-degree murder.

Winnipeg police Chief Danny Smyth has said one-third of the homicides are drug- or gang-related, and are linked to addictions and a trade in methamphetamine.

When asked if more officers are needed on the streets, Smyth has said it is a problem policing cannot solve alone. He has announced recently that officers were being reallocated to different duties to deal with the issue.

The surge in violence prompted Winnipeg Mayor Brian Bowman and Manitoba Premier Brian Pallister to have separate conversations about it with Prime Minister Justin Trudeau.

Frank Cormier, a professor of criminology at the University of Manitoba, says while the violence in recent months is shocking, there has been a decline in crime across the province for the last 20 years. He said variation in crime rates is normal, so there shouldn’t be any rash decisions on spending and police resources.

“By putting time and resources into things that aren’t actually the best approach but that maybe make people feel better, we run the risk of actually making things worse.”

The real solutions, he says, are expensive, will take a long time and need to tackle larger social issues.

“There are too many people in our society whose basic needs are not being met.”