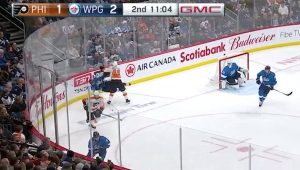 The incident occurred at 9:03 of the second period of the Flyers game in Winnipeg Sunday, when Farabee crashed into Perreault long after the Jets player had given up the puck.

Perreault stayed down on the ice for quite some time, then had to be helped off and went straight to the dressing room. He did not return.

Farabee was assessed a major penalty for interference and game misconduct.

Under the terms of the Collective Bargaining Agreement, Farabee will forfeit $14,919.36. The money goes to the Players’ Emergency Assistance Fund.

Philadelphia’s Joel Farabee has been suspended for three games for Interference on Winnipeg’s Mathieu Perreault. https://t.co/Fh9l4M0mzJ