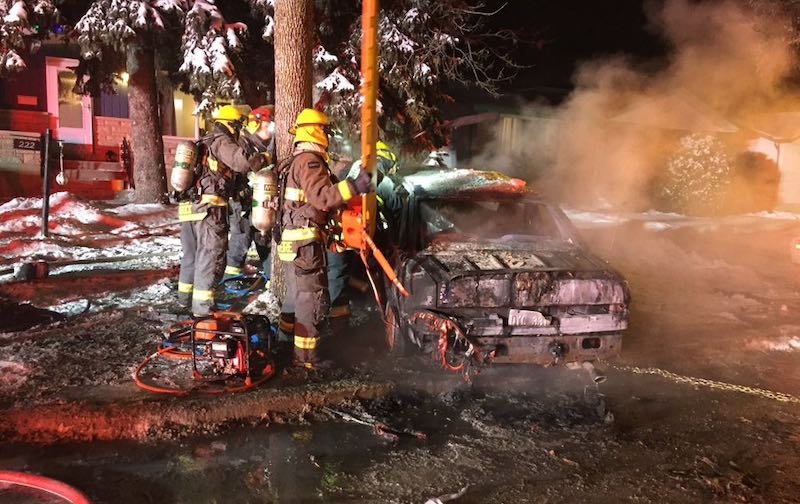 Firefighters put on a vehicle blaze on Donwood Avenue after rescuing the driver on Saturday, December 14, 2019. (@UFFW867 / TWITTER)

Winnipeg firefighters pulled the driver of a burning vehicle to safety Saturday night after a crash near the intersection of Rothesay Street and Donwood Drive.

The Winnipeg Fire Paramedic Service says the single-vehicle collision happened at around 9:42 p.m., causing the driver to become trapped inside the vehicle once it burst into flames.

Paramedics took one person to hospital in unstable condition.

In a separate incident, firefighters responded to a blaze in a one-and-a-half storey home in the 700 block of St. Johns Avenue early Sunday morning.

They encountered the home engulfed in flames with heavy smoke and launched an interior, offensive attack. No one was inside at the time and no injuries were reported.

The cause is under investigation and no damage estimates are available.

On Sunday night, a wood-burning fireplace and chimney were reported to be the cause of a third fire at a home in the 100 block of Pilgrim Avenue. Flames spread to the attic of the home, but were knocked down by around 6:40 p.m.

No injuries were reported, but the home suffered significant smoke, fire and water damage.