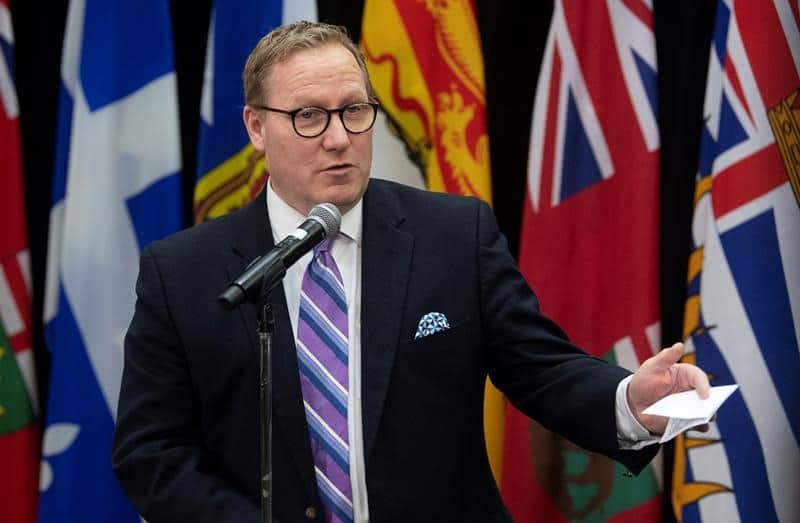 Manitoba Finance Minister Scott Fielding speaks with the media before a meeting with federal and provincial counterparts in Ottawa, Tuesday, Dec. 17, 2019. (THE CANADIAN PRESS/Adrian Wyld)

WINNIPEG — The Manitoba government’s battle to cut the deficit is getting another round of help from federal transfer payments.

New figures from the federal Finance Department show Manitoba is to see a $255-million jump in equalization funding next year. It is the third year in a row that equalization to Manitoba will jump by more than 10 per cent.

Equalization is a federally funded program that gives money to poorer provinces so that they can offer services similar to richer ones. By next year, its funding to Manitoba is to be $774 million, or 45 per cent, higher than it was during the provincial Progressive Conservative government’s first year in power in 2016-17.

Finance Minister Scott Fielding, in Ottawa to meet with his federal and provincial counterparts, said the equalization boost is due largely to Ontario’s economic growth. Ontario stopped receiving equalization payments after several years of qualifying for them.

Fielding said the extra federal cash will help Manitoba balance its budget as promised in 2022-23, but the province has also kept a tight rein on spending.

“Everything helps … but I think the big process for us is ensuring that we’re keeping within our expenditures, and we have done that. In fact, we’ve outperformed over the last three years.” Fielding said Tuesday.

NDP finance critic Mark Wasyliw said the extra federal cash should make the province backtrack on cuts it has implemented to some health services and social programs.

“This takes away one of the arguments that the … government has made for doing all the cuts to health care and education, saying ‘Well, we’re not getting much money from the federal government, so we have to cut,'” Wasyliw said.

Fielding said federal health transfers are not keeping up with rising costs. He and his colleagues have sought annual increases of just over five per cent instead of the current 3.5 per cent.

Fielding also said a balanced budget remains a work in progress. The Tories have promised an end to red ink by 2023 and are predicting a deficit of $350 million for the fiscal year that will end in March.