Home » The Canadian Press » Aho, Staal Score Twice as the Hurricanes Double Up the Winnipeg Jets 6-3

Aho, Staal Score Twice as the Hurricanes Double Up the Winnipeg Jets 6-3 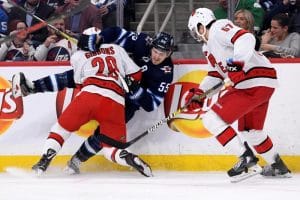 WINNIPEG — Andrei Svechnikov showed he’s more than lucky when it comes to scoring a slick goal.

The Carolina sophomore repeated a highlight reel goal from earlier this season during Tuesday’s 6-3 Hurricanes victory over the Winnipeg Jets Tuesday that extended the team’s point streak to six games.

Svechnikov went around the back of the net, kept the puck on his blade and tossed it over goalie Connor Hellebuyck’s right shoulder to give Carolina a 3-2 lead in the second period.

He first pulled off the lacrosse-like move on Oct. 29 against Calgary.

He added that he’s practised the play for five years.

“I feel like when I stop behind the net, if I got room I’m always going to try that,” he said. “You’ll see, maybe I’m going to score next game.”

Sebastian Aho and Jordan Staal each scored a pair of goals and Lucas Wallmark also had a goal for the Hurricanes (21-11-2), who are 5-0-1 during their point run. Dougie Hamilton contributed three assists, while Nino Niederreiter added a pair and Aho had one.

Petr Mrazek made 30 saves for the Hurricanes, who are 3-0-1 during a five-game road trip that ends Thursday in Colorado.

Hellebuyck stopped 18 shots for Winnipeg before Laurent Brossoit replaced him to start the third period with Carolina ahead 5-2. Brossoit made four saves.

“Just get Adam Lowry not to get tripped and then it doesn’t get back there,” Maurice said. “That’s a tough play for the [goaltender] because it is behind the net. Most of those pucks come around the net wrapped. It’s pretty neat.”

The game was tied 1-1 after the first period.

Winnipeg had the first power play late in the opening period, but Mrazek stopped all three shots he faced.

It wasn’t the same case for Hellebuyck, as Wallmark got a loose puck in the slot and scored on the power play at 18:23.

Jets forward Nikolaj Ehlers helped ensure the visitors wouldn’t take the lead into the dressing room. He spun around inside the blue line and fired the puck straight at the net, where Roslovic was in front to deflect it in with 7.4 seconds remaining in the period.

The second period was highlighted by goals from Aho and Svechnikov.

Aho scored his 19th and 20th goals of the season and picked up his one assist in the middle frame. He has 11 points in his last five games off seven goals and four assists.

Aho’s first goal gave Carolina a 2-1 lead, but Laine deflected in a Nathan Beaulieu shot to tie it up at 12:18.

“It’s not lucky when you practise something over and over. That’s not luck,” Carolina coach Rod Brind’Amour said of Svechnikov’s lacrosse-style goal.

Staal, who called Svechnikov’s goal “the Svechy move,” added his second goal of the game, and fifth of the season, at 3:16 of the third period.

Scheifele scored on the power play at 12:02 with Aho in the penalty box for slashing. Scheifele is on a seven-game point streak, with seven goals and five assists during that span.

“I think as much as it was a slow night for us, they were all over us, too. So you have to give them a lot of credit,” Wheeler said.

Winnipeg wraps up a three-game homestand Thursday against Chicago.