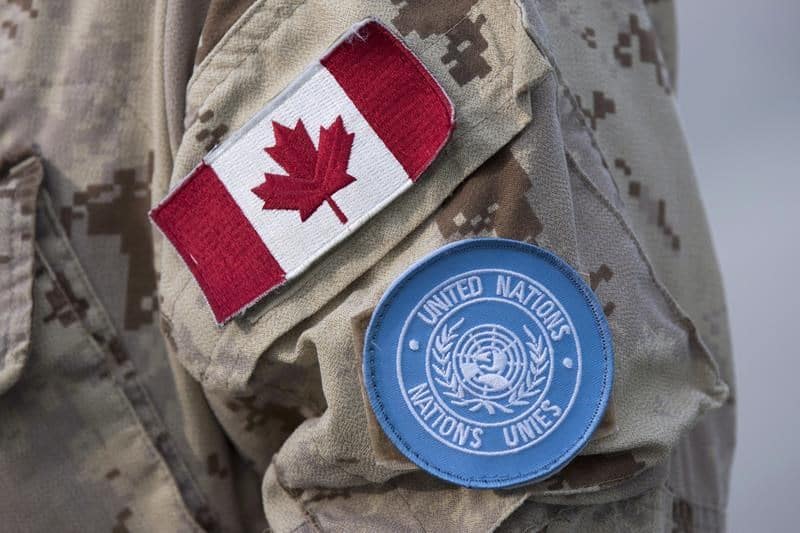 The Canadian and UN flags are seen on the shoulder of a Canadian soldier’s uniform before boarding a plane at CFB Trenton in Trenton, Ont., Thursday, July 5, 2018. (THE CANADIAN PRESS/Lars Hagberg)

OTTAWA — Canada is exploring the possible deployment of military engineers as the newly re-elected Liberal government takes a fresh look at ways to step up its support for United Nations peacekeeping, says Defence Minister Harjit Sajjan.

The government is also looking at having Canadian military trainers join peacekeepers from other nations in the field to help them better do their jobs.

Both would be on top of commitments Canada has already made to the UN in recent years, though the minister cautioned talks between the two sides are still in the very early stages and no decisions have been made.

“This is not something we’re going to do by snapping a finger and getting it done,” Sajjan told The Canadian Press in a recent interview.

“It’s very important that we take the time to get this right because when you do it, it can have a significant impact,” he said. “So these are the things that we’re working on.”

Revelations about the possible new initiatives come after the Liberals promised in their platform during the fall federal election, without any details, that they would “move forward with new investments” to support peacekeeping if re-elected.

That followed a similar promise by the Liberals during the 2015 election to renew Canada’s role in peacekeeping, which later resulted in the 13-month deployment of a helicopter contingent to Mali for medical evacuations.

Canada is currently providing the UN with the occasional use of a military plane to transport troops and equipment to and from Uganda, but a promised 200-member quick-reaction force has yet to become a reality.

Despite these contributions, the Liberals have been criticized by some for not matching their rhetoric around peacekeeping with real engagement and support for the efforts. Others have questioned the benefit of peacekeeping to Canada.

The government remains committed to helping the UN in both the short- and long-term, which includes a focus on training, increasing the role of women in peacekeeping and working on the issue of child soldiers, Sajjan said.

That is why when Atul Khare, who oversees the day-to-day operations of peacekeeping missions in the field, told Sajjan during a visit to Halifax last month that the UN needed engineers, the government started looking into the idea.

“Imagine when you’re going on a patrol, you need to make sure that the routes are cleared (of explosives),” Sajjan said. “Or you can’t do development or build a well in a certain place if the route isn’t cleared. So we’re going to further that discussion.”

Yet even as it looks at addressing some of the UN’s short-term needs, Sajjan said the Liberal government wants to take a big-picture approach to making peacekeeping more effective and build on efforts launched during its first mandate.

That is where the government is considering whether to have Canadian military trainers work in the field with peacekeepers from other parts of the world such as Africa.

“Imagine if we also brought in even greater experience from what we’ve done in Afghanistan and what we’re doing in Iraq: capacity building. Capacity building with mentoring on the ground when the situation is right,” he said, noting that it would be a way to have a bigger impact over a bigger area.

Walter Dorn, an expert on peacekeeping at the Canadian Forces College in Toronto, was skeptical of the government’s desire to send military trainers into the field to work with peacekeepers from other nations given Canada’s lack of experience in the area.

“In order for Canada to provide expert trainers in the field, it needs to get experience in UN field operations,” Dorn said, noting Canada had just 29 military officers participating in peacekeeping efforts at the end of October.

“The soldiers I train from Africa have more experience in UN peace operations than the Canadian soldiers. To gain expertise, Canada has to deploy more military personnel on UN operations.”