Eric Comrie Back in Winnipeg After Jets Claim Goaltender Off Waivers 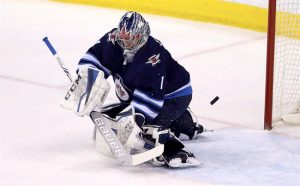 WINNIPEG — Goaltender Eric Comrie is back with the Winnipeg Jets.

The NHL team announced Thursday that it has claimed Comrie off waivers form the Detroit Red Wings.

The 24-year-old Comrie was selected by Winnipeg in the second round, 59th overall, at the 2013 NHL draft and spent his first five professional seasons with the Jets franchise.

He signed a two-year, US$1.4 million contract extension with the Jets in September, but was waived just before the start of the season as the team decided to go with the goaltending tandem of Connor Hellebuyck and Laurent Brossoit.

Comrie was claimed by Arizona and played four games with the American Hockey League’s Tucson Roadrunners before he was traded to Detroit on Nov. 30 for defenceman Vili Saarijarvi.

Comrie went 0-2 in two starts for Detroit, allowing nine goals on 62 shots, before being placed on waivers on Wednesday.

The Edmonton native played mainly for the AHL’s Manitoba Moose in his first stint with the Jets organization. He made five appearances at the NHL level, going 2-3 with a 4.21 goals-against average and .870 save percentage.