Kane Scores, Tacks on Three Assists to Lead Blackhawks in 4-1 Win Over Jets 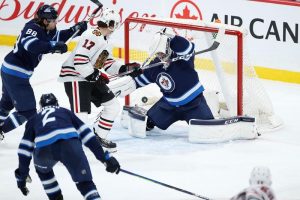 WINNIPEG — Patrick Kane was glad the Chicago Blackhawks kept their cool during Thursday’s 4-1 victory over the Winnipeg Jets.

Kane scored once and added three assists as the Blackhawks shook off a slow second period while clinging to a 1-0 lead.

It took Chicago 12:32 to get their first shot on goal in the second, and they were outshot 14-3 in the middle frame.

“We were really happy with our start, not a great second, and would’ve been easy to be frustrated and not have a great third,” Kane said. “But we came out and, like I said, scored early, which I think helped.

“And then they got one, no real panic on the bench or anything, just kept playing solid, did the right things out there. Nice to build off that start we had and have a great third period, too.”

Alex Nylander had a goal and assist, while Dominik Kubalik and Erik Gustafsson also scored for the Blackhawks.

“We had a lot of good chances, a lot of shots to the net,” Jets forward Nikolaj Ehlers said.

“When you feel like a goalie is going like (Lehner) was tonight, I don’t think we got too much traffic in front of the net — and that’s what you need to do.”

Nylander scored 59 seconds into the game on a two-on-one with Kane, shooting the puck high on Hellebuyck’s glove side.

Kubalik made it 2-0 just 37 seconds into the third period.

“I think we had the best third period with a lead so far this year,” Lehner said. “I think we did all the right things. We were patient, played good defensively and capitalized on some of their (mistakes).”

The Jets didn’t get their first shot on goal until almost five minutes into the first period, when the visitors had already tallied four.

Winnipeg did heat up late in the period, including going on the power play for the final 1:52 of the frame, but Lehner stymied good scoring chances by Patrik Laine, Kyle Connor and Mark Scheifele.

The Jets held a 16-12 edge on shots on goal after the first.

Chicago forward Brandon Saad left the game in the second period after he was checked into the boards by Jets defenceman Luca Sbisa. He fell and appeared to injure his right leg.

“He’s going to be out a couple weeks,” Chicago coach Jeremy Colliton said. “We’ll see. Obviously it’s ankle and I don’t have an exact timeline, but it’s not day-to-day.”

Winnipeg outshot Chicago 14-3 in the second, with Lehner again turning aside Jets sharpshooters such as Connor.

Kane capitalized on a Scheifele turnover near Winnipeg’s blue line and quickly fed the puck to Kubalik, who went in alone and beat Hellebuyck to kickstart the third.

“His linemates do a good job taking care of their end and allow him to play to his strengths,” Jets forward Adam Lowry said of Kane. “Any time he gets open ice he’s real dangerous.

“You saw that he can shoot, he can make plays. That’s why he’s one of the best players in the league.”

Poolman’s one-timer flew past Lehner in a corner at 5:09 of the third.

The Jets were called for too many men and Gustafsson ripped a one-timer past Hellebuyck after getting a pass from Kane.

Winnipeg goes on the road for one game against the Minnesota Wild on Saturday. Chicago plays the Avalanche in Colorado Saturday.