Home » The Canadian Press » Back to the Drawing Board for Missing Heavy Icebreaker: Coast Guard

Back to the Drawing Board for Missing Heavy Icebreaker: Coast Guard 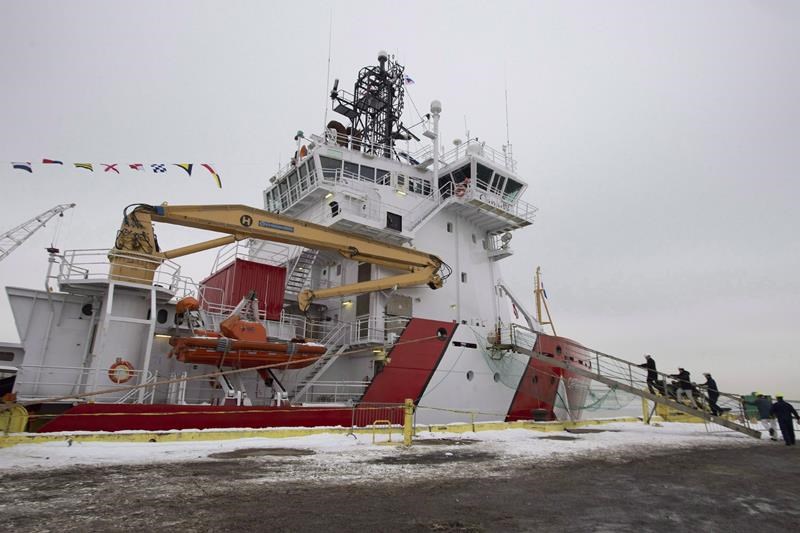 The CCGS Captain Molly Kool is presented to the media after undergoing refit and conversion work at the Davie shipyard, Friday, December 14, 2018 in Levis, Que. (THE CANADIAN PRESS/Jacques Boissinot)

OTTAWA — Call it the case of the missing icebreaker.

The fate of the Canadian Coast Guard’s next heavy icebreaker has been wrapped in mystery since the federal government quietly removed the $1.3-billion project from Vancouver shipyard Seaspan’s order book in May.

But plans to build the icebreaker, which was first promised by Stephen Harper’s Conservative government more than a decade ago, have not been cancelled, says Coast Guard Commissioner Mario Pelletier.

Rather, Pelletier said the icebreaker has been sent back to the drawing board as the Coast Guard looks to update the original design to account for changes in technology and the government’s requirements.

“It’s still in the plan,” Pelletier told The Canadian Press this week. “Actually, we’re updating our design. It was a really good design. … Because it’s been a number of years, we’re just updating the design and we’ll see how that unfolds and we’re going to queue it somewhere.”

Exactly when and where the CCGS John G. Diefenbaker, as the icebreaker is to be named, will be built — and how much it will ultimately cost — remains up in the air.

But Pelletier expressed confidence the icebreaker it is expected to replace, the CCGS Louis S. St-Laurent — in service since 1969 — will be able to operate through to the late 2020s thanks to various upgrades. That includes a recent $7.1-million life extension by Quebec’s Chantier Davie shipyard.

The Diefenbaker was originally supposed to replace the St-Laurent in 2017.

“Before we decided to invest in vessel life extension, we did an extensive survey … and they were amazed at the amount of steel left on the ship,” said Pelletier, who previously served on the Louis S. St-Laurent when it was still running on steam power.

“So yes, the ship is old. (But it has) a lot of steel left so that makes it safe and the propulsion-control system and everything else have been upgraded. They were upgraded in the ’90s, were upgraded four or five years ago again. So she’s been extremely reliable.”

Seaspan was tapped in 2011 to build Diefenbaker as part of a larger order that also included four science vessels for the Coast Guard and two navy supply ships, but it was removed from the Vancouver shipyard’s order book and replaced with 16 smaller multipurpose vessels in May.

Davie has been jumping at the chance to have the Diefenbaker built at its shipyard outside Quebec City.

The federal government announced Thursday that Davie was the only shipyard to qualify for addition into Canada’s multibillion-dollar shipbuilding strategy, through which Ottawa is already building new naval warships, Arctic patrol vessels and Coast Guard science ships.

While that sets the company up to win potentially billions of dollars of federal work building six medium icebreakers for the Coast Guard, it has been lobbying hard for the heavier Diefenbaker as well.

The government has said Ontario-based Heddle Shipyards, which had raised concerns from the start that the selection process was rigged in Davie’s favour, did not qualify for inclusion in the strategy. The company has said it is looking at its options.

Pelletier said no decision has been made on where the Diefenbaker will be built, adding: “The way things are starting up, we are going to start the (multipurpose vessels) and the (six) icebreakers before. When we look at all options for the polar, we’ll see where it can go.”

The Coast Guard commissioner applauded the government’s addition of a third shipyard focused exclusively on building icebreakers as “good news” for his service given the age of its current fleet, with many ships having already exceeded their expected lifespans.

That has resulted in more unplanned breakdowns, leading to ferry-service disruptions, difficulties resupplying northern and coastal communities and complaints from industry about negative impacts on maritime trade.

“The industry both down south and up north are putting a lot of pressure for us to renew our program icebreakers,” Pelletier said, referring to the main icebreaker fleet.

The Coast Guard did obtain three second-hand icebreakers for more than $800 million from Davie. The company is still in the process of converting two of them for the Coast Guard’s use to help fill the gap, but those are considered a temporary measure.