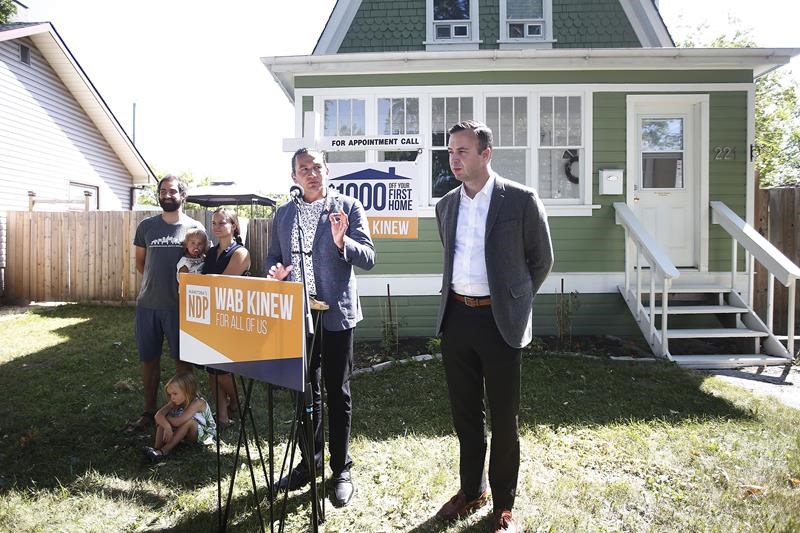 Adrien Sala, NDP candidate for St James, right, listens as Wab Kinew, leader of the Manitoba NDP, centre, speaks during a press conference in Winnipeg Friday, August 16, 2019, as Ben and Carly Cressman, and their daughters Hannah, 2, and Stella, 3, look on. (THE CANADIAN PRESS/John Woods )

WINNIPEG — Manitoba could become the next battleground over time change.

The Opposition New Democrats are launching a website and public consultations on whether the province should stop springing forward to daylight time in March and falling back to standard time in November and, if so, what time should be adopted.

“There are lots of problems associated with time change that have been studied — things like negative sleep impacts. There’s significant changes in terms of people’s health,” said New Democrat legislature member Adrien Sala.

“It’s important that we do understand where Manitobans are at on this issue.”

The idea follows moves in other provinces as well as some states south of the border.

The NDP government in British Columbia has put forward legislation to adopt daylight time year-round, although Premier John Horgan has said he will wait to see whether Washington, Oregon and California do the same.

In the United States, Florida and some other states have passed bills to adopt permanent daylight time, but the change requires federal approval.

The discussion has flared up before in Manitoba. The province’s auto insurance Crown corporation reported that collisions on the first Monday following the spring clock change in 2014 were 20 per cent higher than the average of all other Mondays that year.

Last year, an independent member of the legislature proposed a bill to adopt standard time. The bill died after not receiving support, and the governing Progressive Conservatives have shown no appetite for time change.

Opinions on social media are mixed, even among those who want a change. Some favour permanent daylight time to preserve late sunsets in summer, but others say that would mean sunrises far too late in winter.

Some researchers at Simon Fraser University have warned the B.C. government about the latter, saying permanent daylight time would make it harder for people to wake up in winter and would throw people’s body clocks out of sync with the sun.

Most of North America went through a similar debate 14 years ago. A compromise was reached that saw daylight time extended by three weeks in the spring and one week in the fall. Standard time was preserved partly to appease parents who didn’t like the idea of their kids going to school in pitch-black darkness in December and January.

Manitoba Liberals have already proposed making time change a referendum question in the next Manitoba election slated for 2023.

Sala said the NDP would prefer to get people thinking about it now.

“Manitobans deserve a chance to be heard sooner than later on this particular question. This consultation will allow us to get a sense of where Manitobans are at now.”