How to Track Santa Claus on His Around-the-Globe Journey

Santa Claus and his reindeer are already well on their way in the skies, embarking on a journey from the North Pole to deliver presents to millions of children around the world.

Here’s how you track the big man in red and find out when he enters Canadian airspace.

NORAD — North American Aerospace Defense Command — is tasked every year with guiding Santa once he crosses over the continent. Through a joint mission with both Canadian and U.S. aerospace command, Santa’s sleigh is safely guided into NORAD airspace.

You can get an up-to-the-minute look at Santa’s trip by visiting NORADSanta.org, as Google Maps provides real-time updates on his current location. You can also follow @NoradSanta on Twitter and Facebook. You can also try out the Google Santa Tracker. 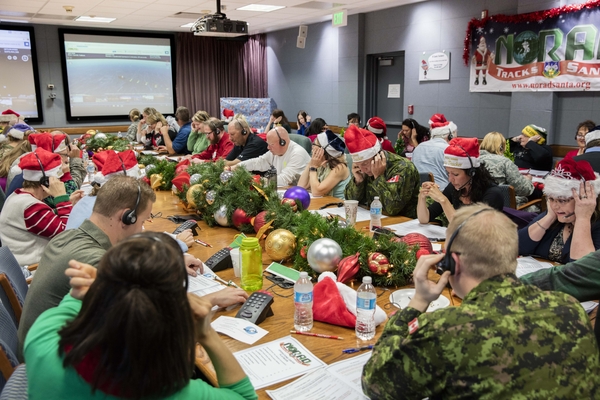 Volunteers answer phones during annual NORAD Tracks Santa event on Peterson AFB, CO December 24. This year NTS had more 1,500 volunteers answering 150,000 phone calls, 2,800 emails and 3,000 on-star requests from children around the world asking where Santa is at and when he will arrive at their house. (NORAD / HANDOUT)