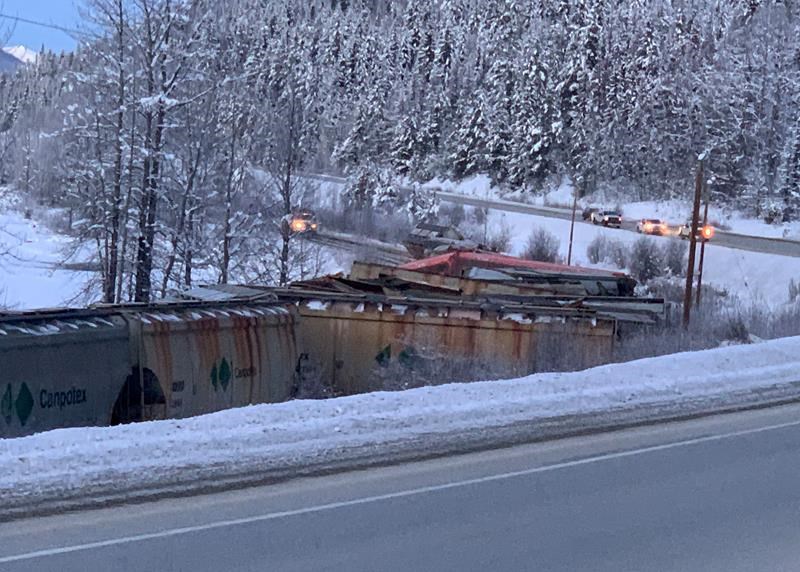 Emergency responders attend to the scene of a train derailment in the eastern B.C. region of Fraser Fort George in a Thursday, Dec. 26, 2019, handout photo. (THE CANADIAN PRESS/HO-Train-Donal O’Beirne)

The railway company said early reports suggest 26 railcars derailed along the track in the Fraser Fort-George region about 30 kilometres east of Mount Robson, near the Alberta boundary.

The train involved is part of the potash unit and no other commodities or goods were on board, it said.

CN said it believes one or two cars were partially submerged in Moose Lake and the company’s environmental experts are working with government officials to assess possible impacts to the environment.

No one was injured, there were no fires and no railcars carrying dangerous goods were involved, the company said.

The cause of the derailment is under investigation and the tracks are closed.

“CN would like to thank first responders present at the scene of the incident and would also like to apologize for the inconvenience caused,” company spokesman Alexandre Boule says in a statement.

Moose Lake is located along a section of the Yellowhead Highway that runs between Jasper National Park in Alberta and Mount Robson Provincial Park in B.C. The derailment site is about 30 kilometres northeast of Valemount, B.C.

Edmonton resident Donal O’Beirne said he was driving along the highway on Thursday morning when he stopped to take photos of the site.

“At least one of the cars was in Moose Lake itself and there was a lot of overturned cars that spilled potash and broken axles everywhere,” he said.

The train was “torn up,” he said, but crews were already working to clear the site.

O’Beirne has travelled as far as Halifax on a passenger train and said Moose Lake was one of the special highlights of the ride.

“That particular spot is one of the most beautiful spots you’ll ever see on the VIA Rail route,” he said.

British Columbia’s Ministry of the Environment staff are monitoring the site, it said in an email.

As the responsible party, CN has contracted environmental crews to begin cleanup, the ministry said.

The ministry said one car entered the lake and described the potash on board as a common fertilizer.