Home » News » Train with 12 People On Board Derails Near MacGregor

Train with 12 People On Board Derails Near MacGregor 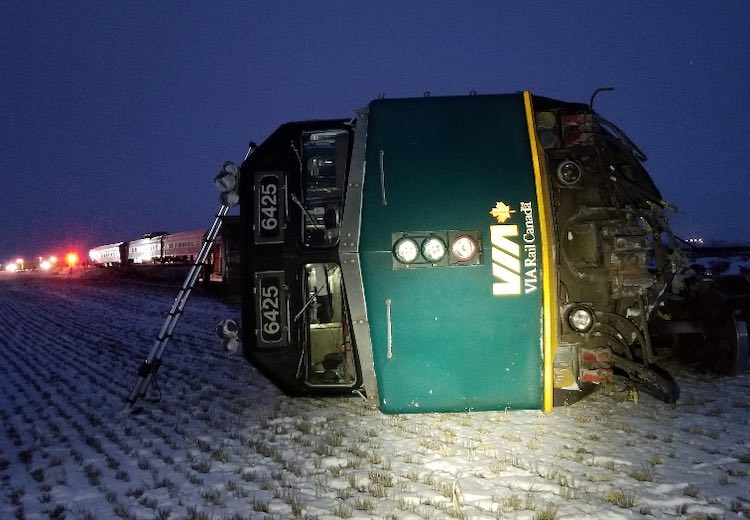 A VIA Rail train derailed early Tuesday, December 31, 2019, near MacGregor, Manitoba with 12 people on board. (RCMP / HANDOUT)

A VIA Rail train derailed early Tuesday west of Winnipeg with 12 people on board.

The derailment occurred at around 6:45 a.m. at PR 350 and Road 73N, roughly 15 kilometres north of the community of MacGregor.

RCMP say passengers and crew are being assessed, but their injuries don’t appear to be serious. Seven passengers and five crew members were on board at the time.

Photos from the scene show a locomotive lying on its side in the snow, while the passenger cars were tilted but still remaining mostly upright on the track.

Train 692 was headed from Churchill, Manitoba to Winnipeg.

The cause of the derailment is under investigation by the Transportation Safety Board.

VIA Rail Canada spokesman Karl-Philip Marchand Giguere said in an email that an environment crew was on its way to the site, as a small amount of fuel had leaked from one of the locomotives.

“The cause of the incident is under investigation and we are working with authorities to determine exactly what happened.”

He said that due to the derailment, VIA had cancelled its Tuesday trip from Winnipeg to Thompson and Wednesday’s trip between Thompson and The Pas.

“This is an unfortunate situation and we extend our apologies to our customers for the impacts on their travel plans during this holiday season,” he said.

#rcmpmb on scene of VIA passenger train derailment in the area of PR 350 at Road 73N with 12 people on board. Passengers and crew are being assessed but at this time the injuries do not appear to be serious. Derailment occurred at approximately 6:45am. pic.twitter.com/mYfhgH9hoR