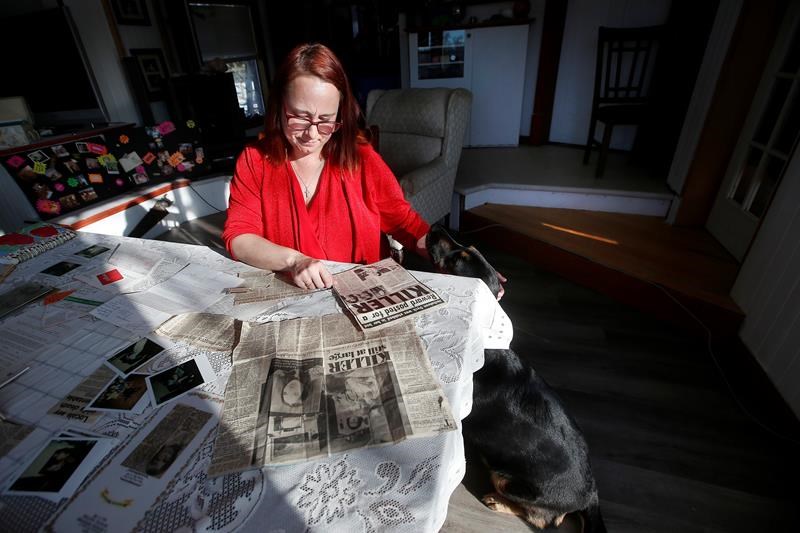 Denise Pochinko, whose mother, Jackaleen Dyck, was murdered in Winnipeg October 4, 1980 while she and her sister Jody were in the next room, looks over some news clippings and family photos in her home at Winnipeg Beach Thursday, November 21, 2019. The grisly murder is still unsolved and Pochinko is looking for answers. (THE CANADIAN PRESS/John Woods)

WINNIPEG — Denise Pochinko remembers waking up and hearing the screams. She hid under blankets with her sister until sirens drowned out their panicked breathing.

It was October 1980 in Winnipeg and she was five years old; her sister Jody was six.

Their mother, Jackaleen Dyck, was viciously attacked in her bedroom not far from where the two girls huddled in fear. Dyck, 23, was stabbed 28 times and died in hospital. Her killing has never been solved.

“I live that every single day of my life,” Pochinko said in an interview.

Almost 40 years later, she is using social media to look for people who knew her mother — and who many provide clues about the killing.

Pochinko created a page about the case on Facebook in 2013, but the emotional toll was too much. After receiving support from a church community, she has reactivated the account and is looking for any bread crumb of information.

“My ideal situation is finding out the truth,” Pochinko says. “I’d love to learn the truth about who she was, even gain a better understanding of who I am.”

On a cold fall day in November, Pochinko lays out all the details she’s been able to gather on a table in her home in a small beach community north of Winnipeg. It’s too hard to live in the city where the innocence of her childhood was stolen.

Two years after the killing, her sister died in an accident.

Pochinko has her parents’ wedding certificate and photos of the young couple from when they first got together in 1973. Old Polaroid pictures show them smiling and hugging.

Photos from the years after Pochinko and her sister were born show more difficult times. Money was tight and the pressure of having children so young was weighing on her parents. They separated not long before Dyck was slain.

The sisters moved in with Dyck’s relatives after her death. Pochinko’s father was in a new relationship and a new city. They never became close.

That horrific night created a ripple effect. Pochinko says she has always felt as if things could be torn away at any moment, so she has clung tightly to unhealthy relationships even when it wasn’t good for her.

“Nobody should have to go through what I did. I was an orphan child.”

She points to paperwork declaring her mother’s death. Nearby, yellowed newspaper article headlines declare reward money for information about the killer, which has since expired.

“We know that someone, somewhere has information that can help us,” Crime Insp. Des DePourcq said in a Winnipeg Sun story from the time.

A headline in the Winnipeg Free Press declared: “Killer still at large.”

A black-and-white photo of Dyck’s fresh, round face framed by long dark hair accompanied each article.

They described how Dyck, a friend, her nephew and her two daughters were asleep in the small home. About 4 a.m., the friend was awoken by frantic calls for help before he saw someone run out the back door. He found Dyck bleeding in bed.

The articles said Dyck had been harassed in the weeks before and a beer bottle was thrown through her bedroom window. Officers found no signs of forced entry the night she was killed. Police ruled out robbery and sexual assault as motives.

For decades it felt like that may be all Pochinko would know of her mother, but through social media she’s been contacted by former neighbours and friends.

She’s learned more about her mother’s love and brilliant smile, but also about how she had a difficult life and didn’t always make good choices.

Pochinko’s been told about a few different suspects and has connected with a private investigator, but hasn’t come across a significant lead.

Winnipeg police say many officers have worked on the case extensively. Details can’t be shared because it remains an open investigation. Anyone with information is encouraged to contact the historical homicide unit or Crime Stoppers.

Pochinko remains hopeful, she says, because she has to.

“I’m trapped. That little girl, she is trapped.”