Rescue Group: Stray Dog’s Condition Improving After Being Found with Jar on Head 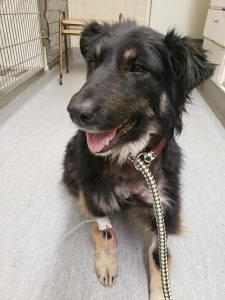 The fluffy black-and-white female, who they’ve been calling “Greta,” is seen in the care of a veterinary hospital in Winnipeg in a handout photo. (THE CANADIAN PRESS/HO-Manitoba Underdogs Rescue)

WINNIPEG — After days of uncertainty that followed the rescue of a Manitoba stray dog with pellets in her body, metal in her belly and a plastic jar stuck on her head, the group that’s been caring for the beleaguered but friendly pooch says she appears to be improving.

Manitoba Underdogs Rescue has posted on Facebook that the dog — which they’ve been calling Greta — remains in a Winnipeg veterinary hospital but appears “much brighter and was full of smiles” when a member of the group visited Tuesday.

Last weekend, the group posted an update that Greta had blood in her urine and wasn’t interested in eating, and spokeswoman Lindsay Gillanders warned that her recovery wasn’t certain.

According to the latest post, there is still swelling in her neck from a bite wound, which is believed to have come from other dogs.

RCMP have said police were contacted Boxing Day by a homeowner in a northern community who told them the dog was underneath her deck. Officers cut the plastic jar off the dog and took her to a shelter.

Manitoba Underdogs Rescue says Greta’s bloodwork will be rechecked Thursday to ensure everything is improving, noting she remains in the vet hospital for observation.

“We know so many people have grown to love this beautiful dog as much as we do! The support we have received has been overwhelming,” Tuesday’s post from the group stated.

The group said there was evidence she’d been shot with a pellet gun six times.

Gillanders said her group was told that not only was Greta’s head stuck in the jar, which she believed was a peanut butter jar, but the jar was also frozen to the ground.

Initial bloodwork found that Greta was suffering from some sort of metal toxicity, and an X-ray revealed a mass in her stomach that turned out to be metal. The group believes it was from eating cans.

Gillanders said vomiting was induced and the metal came up, along with a turkey bone and a Christmas orange.

She explained the starving animal may have swallowed a can because sweet residue remained on it.

The group is accepting donations in order to pay for Greta’s care.