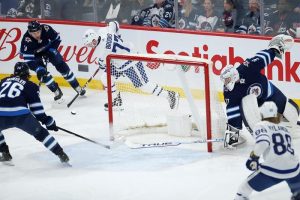 Winnipeg Jets goaltender Connor Hellebuyck (37) gets caught behind the net as Toronto Maple Leafs’ Adam Brooks (77) steals the puck and passes to William Nylander (88) who takes the shot to score during first-period NHL action in Winnipeg on Thursday, Jan. 2, 2020. (THE CANADIAN PRESS/John Woods)

Nylander had two goals an assist as the Leafs extended their point streak to nine games with a 6-3 victory over the Winnipeg Jets on Thursday.

“He’s finding open spots, the puck is coming to him and he’s not missing,” said Leafs forward Mitch Marner, who also scored. “So that’s big for our team, it helps us a lot. He’s a big part of this team so it’s good for everyone.”

Nylander has at least one goal in each of his past five games. His five-game point streak includes six goals and five assists.

Kasperi Kapanen had a goal and assist for Toronto and Travis Dermott and Pierre Engvall and also scored for the Leafs (23-14-5), who are 8-0-1 during their point streak. Alexander Kerfoot picked up a pair of assists.

Kyle Connor and Mark Scheifele each had a goal and an assist for Winnipeg (22-16-3). Patrik Laine also scored.

“We just made a couple of mistakes that cost us a couple of goals, but other than that I think we had some really good chances, put up a lot of shots so we could easily had a couple more but three wasn’t enough tonight,” Laine said.

Connor Hellebuyck stopped 12-of-17 shots for the Jets before being replaced by Laurent Brossoit, who made 10 saves on 11 shots in the third period.

Frederik Andersen stopped 45 shots for the Leafs, who scored three goals on nine shots in the second period and heard plenty of cheers from Toronto fans in the stands.

The Leafs led 2-0 after the first period, but the teams combined for six goals in the middle frame and Toronto came out of it with the 5-3 lead.

Nylander scored his 18th of the season at 3:24 of the first period.

“He’s feeling it and he’s making good on his chances. It’s been fun to watch him here.”

Jets defenceman Luca Sbisa couldn’t control the puck inside Winnipeg’s blue line and Kapanen was right there to scoop it up and score on Hellebuyck at the nine-minute mark of the first.

“I think after two (periods) we’re at 12 (giveaways), they’re at 11,” Maurice said. “Whether you trust that stat or not, we forced them into a bunch, they forced us into a bunch. They made more of what we gave them.”

Winnipeg went on the power play early in the second after Leafs forward Jason Spezza was sent off for delay of game.

Connor used the man advantage to record his team-leading 21st goal of the season with a wrist shot on Andersen’s stick side at 3:45. Connor has seven goals in his past five games.

Laine tied it 2-2 at 7:44 with a sharp-angled shot from near the goal line. He has four goals and three assists in his past six games.

The Leafs were being outshot 12-0 in the period after Laine notched his 15th goal of the season, but they capitalized on their first two shots of the frame.

Dermott poked in a loose puck in the crease at 9:02 and Engvall scored 35 seconds later to make it 4-2.

Scheifele notched his 19th goal of the season at 12:48 to squeeze the score, but Marner fired a one-timer on the power play and the puck bounced off Hellebuyck’s arm into the net to restore Toronto’s two-goal lead.

Shots on goal after the second were 37-17 in Winnipeg’s favour.

“We were being sloppy and giving them a lot of easy entries into our zone and easy shots, so once they caught up there we kind of knew what we had to do and I think we came out and played well in the third,” Nylander said.

Nylander scored his second goal of the game at 8:45 when he beat Brossoit from the side of the net.