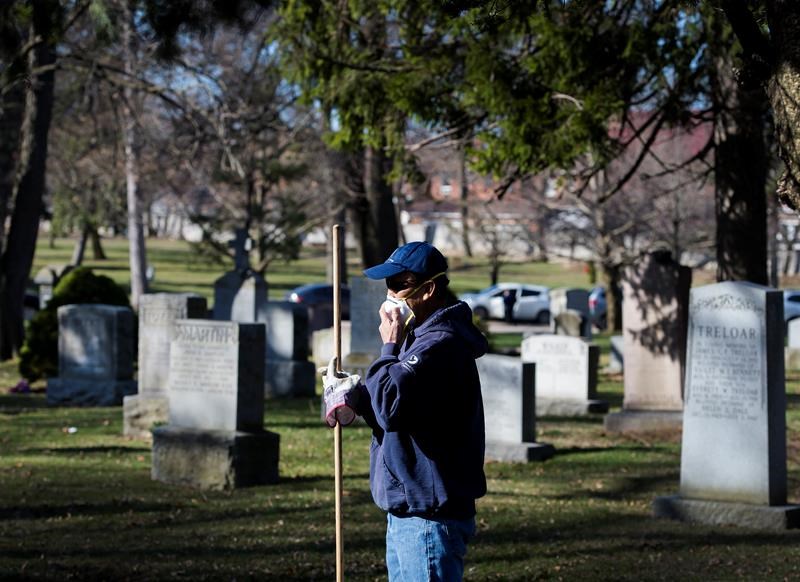 A worker walks through the Prospect Cemetery in Toronto on Monday, April 6, 2020. (THE CANADIAN PRESS/Nathan Denette)

WINNIPEG, Man. — The manager of a Winnipeg funeral home says the province needs to increase the cap on gatherings to allow families to grieve properly.

Michael Vogiatzakis of Voyage Funeral points out that includes staff and an officiant, so families are left with a maximum of 44 to 45 mourners at the funeral home.

Vogiatzakis says it’s not fair that restrictions have been loosened at restaurants and casinos, but not for funeral homes.

Dr. Brent Roussin, the province’s chief public health officer, has said funerals are super-spreader events and there is no plan to increase the cap at funeral homes.

Vogiatzakis says the limit has cut his business in half.

Many families are opting for cremation and hoping to have a service later, but he said that’s like putting a Band-Aid on a big cut that continues to bleed and hurt.

“The government is going to cause a lot of mental illness amongst families that haven’t had a chance to grieve properly, haven’t had closure,” he said.

“Death is not something we can just stick on the shelf and pretend it didn’t happen. Everyone has lived a life and everyone deserves to be acknowledged.”

On the business side, Vogiatzakis said, funeral homes still need to pay taxes and bills, despite fewer services.

He notes that churches holding funerals don’t face the same restrictions. They are allowed up to 30 per cent capacity, which could be much more than 50 people.

“It’s unfair business practice,” he said, adding his funeral home could hold 75 people under that rule.

“Now they are allowing kids back to school. How’s that fair? It makes no sense whatsoever what Dr. Roussin is doing.” (CTV Winnipeg)