Tiz the Law Tiz the Favourite in the Kentucky Derby 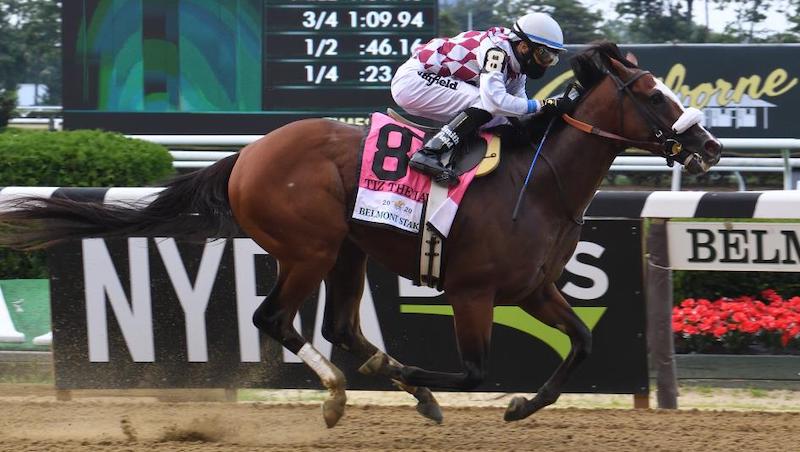 It’s hard to imagine any of the 18 other entries in the 146th running of the Kentucky Derby will even get close to Tiz the Law. Especially after a mile and a quarter.

On Saturday, Manitobans can watch and wager on the strangest Derby in history. For one thing, the Derby is usually the first jewel of horse racing’s Triple Crown. This year, because of the COVID-19 pandemic, it will be the second jewel, after the Belmont Stakes. For another, it’s usually run in May. This year, it will be run on Labour Day Saturday.

This year, 18 of the best three-year-olds in the world will run for $3 million in prize money. But despite the fact that Authentic, Thousand Words and Honor A.P. are magnificent thoroughbreds, they simply aren’t Tiz the Law.

“It’s hard to look past Tiz the Law to win tomorrow’s Kentucky Derby, isn’t it?” said ASD handicapper Ivan Bigg. “He’s shown himself to be a cut above all other three-year-olds, having won the Belmont Stakes and the Travers Stakes with ease.

“The only way my future wager choice, Thousand Words, has a chance to win the 146th Run for the Roses is for Tiz the Law to get into trouble in the 18-horse field — and I’m certainly not hoping for that. Or am I? Tiz the Law will likely clear the field from his No. 17 post position and that will be that.”

Even Marcus Hersh, the handicapper for the Daily Racing Form, is convinced Tiz the Law is probably unbeatable.

“Tiz the Law is an absolute powerhouse of a racehorse,” wrote Hersh. “This handicapper was a devoted skeptic of the horse all the way through the Travers, but how can one doubt a beast who is racing and training like this? The longer the season has gone, the stronger the Law has become, and his works and gallops since the last race show a horse still at the peak of his powers.”

Here’s the field for the 146th Running of the Kentucky Derby: 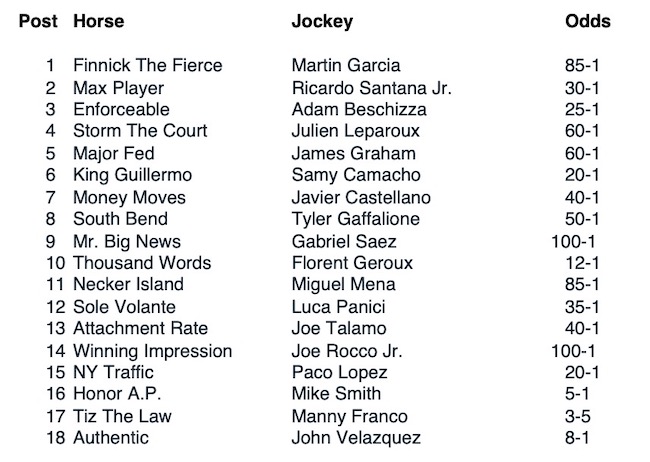 The fact that three best horses in the field are starting way out at 16, 17 and 18, might play a role in the outcome. However, over a mile and a quarter, it shouldn’t make that big a difference.

My pick is Tiz the Law to win with a 17-16-10 Triactor and I don’t believe I have ever chosen those three numbers in a Triactor bet in 50 years of playing the ponies.

Ivan Bigg plays much more exotic games than I do so here is the Downs’ handicapper’s choices for tomorrow’s race.

“My bets will likely be Superfecta and Super Hi 5 wheels with Tiz the Law on top and Thousand Words in the fourth and fifth positions,” he said. “Of course, if Thousand Words has improved a whole bunch since his Shared Belief Stakes victory at Del Mar a month ago, I stand to collect about $8,500 for my $200 in future wagers I made over the past months at odds as high as 65-1.

“But I’m also a realist. And let’s just say, ‘May the best horse win.’ Tiz the Law will likely just use the Kentucky Derby as a stepping stone to the Preakness Stakes in a month to become the third Triple Crown winner in five years — with an asterisk because of a mixed-up schedule and a shorter Belmont Stakes.”

First post at Churchill Downs is 10 a.m. on Saturday. The Derby will be run at 5 p.m. and can be seen at home on NBC TV or if you have hpibet.com, you can watch it on your devices and wager accordingly.

At ASD, the Terrace Dining Room opens at 9:30 a.m. for those with reservations and Ivan Bigg’s “I won bigger” betting group will take apart the Derby card at 10:30 a.m.