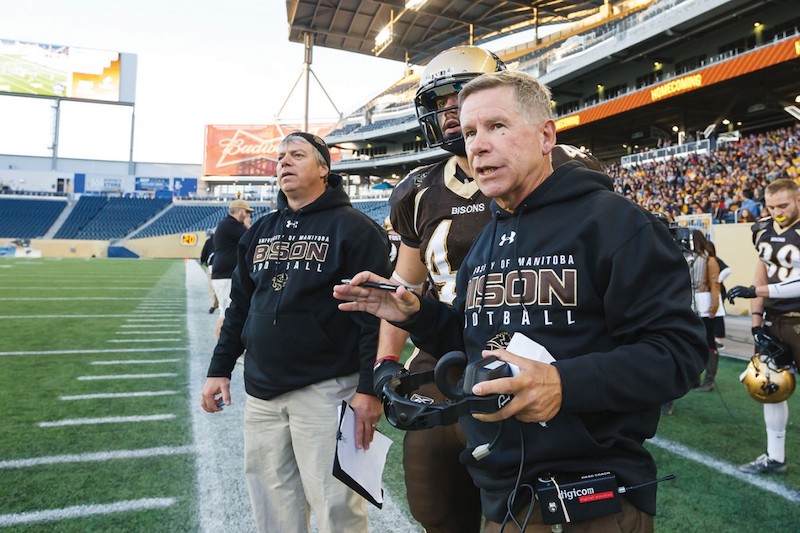 One of the first things the University of Manitoba Bisons football team will learn when training camp opens is how to form a socially-distanced huddle.

A part of football that’s been second nature since they learned the sport now requires players standing two metres apart.

A coach will hold up cards with plays on them for those at the back of the uncompressed huddle.

“It’s literally the single element you would take for granted in football.” Bisons head coach Brian Dobie said. “They’ve got to re-learn it because of the COVID regulations.”

There won’t be a Vanier Cup or Mitchell or Uteck bowl games in 2020. Three of four U Sports conferences will not operate football schedules.

The RSEQ in Quebec hasn’t yet ruled out conference football.

Schools in other conferences are trying to offer some semblance of varsity football to student-athletes despite the COVID-19 pandemic.

“I haven’t talked to every coach directly, but I’ve been on some calls and the sense I get is everybody will have some sort of football program this fall to provide for the athletes,” Ontario University Athletics chief executive officer Gord Grace said.

What that looks like depends on restrictions and protocols that vary from province to province, and from school to school.

While many students are staying home to take classes online, some out-of-province football players are currently isolating in apartments, dormitories and residences so they can complete a quarantine and get on the field.

Dinos head coach Wayne Harris says he’ll wear a mask on the field when he’s in close proximity to players.

“I think the university’s expectations are quite a bit more strict than what Alberta authorities’ guidelines are,” Harris said.

“It’s definitely an organizational challenge to keep everything afloat.”

The St. Francis Xavier X-Men in Antigonish, N.S., aren’t expected to step onto the turf before Sept. 19.

Nova Scotia requires a 14-day quarantine for anyone entering from outside the province. A percentage of X-Men fall into that category.

“To use a bit of a football analogy, we’re trying to come into this with a bit of a game plan, but it’s going to come down to one down at a time, and the ability to adapt and make adjustments,” St. FX athletic director Leo MacPherson said.

The offensive and defensive lines are in one, the quarterbacks, receivers and defensive backs make up another, with linebackers and running backs in another.

Players aren’t required to be tested, nor will their temperatures be taken, but they will answer a daily checklist of health questions, the coach said.

Players must wear masks to and from the field. Cohort groups can’t be within 10 metres of each other.

A member of Morris’s coaching staff is a designated COVID-19 monitor. Team meetings are Zoom calls.

The first three weeks of training camp will be individual work with no offence versus defence. Camp then breaks for two weeks.

“The reason we have to have two weeks off is to re-cohort,” Morris explained. “Then we can do offence versus defence and those sorts of things.

“The big thing is, they’re with us for two hours and then they go out into the world. We’ve talked a lot as a team about their responsibility to us as a team and you’ve got to look after your teammates. You just can’t be going out and doing the things you did in the past.”

Not only did Canada West, the OUA and Atlantic University Sport cancel conference football games, there isn’t even the prospect of exhibition games.

Transporting a large number of athletes in buses from city to city or over provincial boundaries is problematic on a number of fronts, and health authorities might not approve it.

There also isn’t the budget for it. Universities face provincial funding cutbacks because of the pandemic’s economic pressure on government purses.

If a player opts to remain at home to take university courses and not report to training camp, it’s up to each school whether that player receives his Athletic Financial Award (AFA), which covers tuition and fees.

“In order for kid to get a scholarship, they kind of have to be here training with us,” Morris said. “You can’t really just give kids scholarships for sitting at home on their computer.”

Calgary initially made attendance a condition of the scholarship, but Harris indicated exceptions could be made for players who stay home because of underlying health conditions.

Manitoba and St. FX are providing scholarships for a few players who aren’t reporting. They’ll participate remotely in team meetings and follow a training program at home.

“We made a commitment to honour those AFAs even if they’re not going to be here,” MacPherson said. “The decision to honour those is really pretty much an institutional decision.”

Why take on the logistical hurdles and headaches to run football practices when there are no games?

Coaches insist the players crave a student-athlete experience in which they can be with their peers.

“No one from our team opted not to come back,” Morris said. “The scholarship cap in the country is 33 so they’re not all coming back because they’re getting scholarships.

“They want to be around their teammates. It’s an important part of socialization for a lot of these kids.”

The pressure of an upcoming game now absent, Dobie has the luxury of time to teach players more football, which particularly benefits first-year players.

“Our goal is to move forward to prepare our team to chase the Vanier Cup in 2021,” the Bisons coach said. “The way we operate is going to be a little different because it’s different for every university in every region for different reasons.

“I think we’re all just trying to do the best we can in order to keep our kids engaged and motivated, teach them and hopefully create a really good team.”