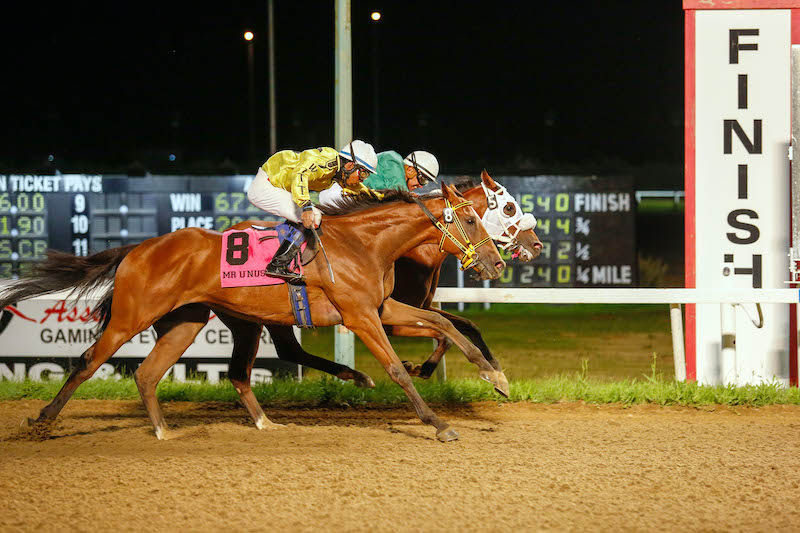 According to race secretary Dustin Davis, Andrew Stronach’s Deep Explorer, is the 4-5 favourite in the $30,000 Manitoba Gold Cup on Monday night at Assiniboia Downs.

Among the leading challengers, at 6-1, is Manitoba Derby champion Mongolian Wind.

However, Deep Explorer, the seven-year-old Kentucky-bred gelding that Stronach purchased from Henry Witt Jr., right after he won the Uene Overnight Stakes last month, is in Lethbridge today and will be formally scratched before Monday night’s big race. Deep Explorer is expected to race next at Hastings Downs in Vancouver on Thursday night

As well, Stronach owns Derby champion Mongolian Wind and while there had been some talk that the Gold Cup would be Mongolian Wind’s prep for the Canadian Derby on Sept. 27, at Century Mile in Edmonton, there is also been a loud rumour this weekend that Stronach will scratch Mongolian Wind, as well.

This all means, that two Jerry Gourneau-trained Stakes winners and Calgary invader Sir Bronx appear to be the new favourites in the Gold Cup. Expect wat was once a very tough nine-horse field on Monday night to turn into a wide-open seven- or eight-horse field. Still, it’s the race that Downs CEO Darren Dunn looks forward to the most each meet.

“My favorite race of the year,” Dunn said on Sunday. “The absolute best on grounds going at it over a stamina-testing distance. A large field of closely matched stakes winners that includes a rare visit from this year’s Manitoba Derby winning horse. This race has all of the elements required to be one of the best Gold Cup’s in years.”

Kentucky-bred Deep Explorer arrived at the Downs from Will Rogers Race Track in Claremore, Okla., in late May and won three of the four races he’s entered – all of them Stakes events and all for his former owner, Henry Witt Jr.

His second-place finish in the Manitoba Mile was part of one of the most incredible evenings in a Downs’ season filled with incredible evenings. That night, Gold Buyer, a Texas invader owned by Mike Powers and also trained by Gourneau finished first. The favourite, Deep Explorer, owned at the time by Henry Witt Jr. and trained by Gourneau finished second and Mas Mischief, also owned by Henry Witt Jr. and trained by, wait for it, Gourneau, finished third.

It was an incredible result for Gourneau, the leading — and record-setting –trainer at the Downs this year and the 2018 champion trainer at ASD. Not often, at any track, does one trainer claim win, place and show in a Stakes race.

However, Deep Explorer, now owned by Stronach, trained by Wayne Eno and tentatively ridden by Wilmer Galviz, is out of the Gold Cup and that opens up the race for the two Gourneau-trained entries, Mas Mischief (3-1) and Gold Buyer (10-1), along with Sir Bronx (8-1), a horse that actually hasn’t competed since Oct. 14, 2019.

Mas Mischief, also owned by Witt and trained by Gourneau, is ridden by soon-to-be-crowned jockey champion Antonio Whitehall. The six-year-old Kentucky-bred gelding has yet to win at ASD this year, finishing third in the Uene Overnight Stakes and third in the Manitoba Mile. He’s now the “winning pre-race selection” by Downs track announcer and handicapper Kirt Contois

Gold Buyer, meanwhile, is a four-year old gray gelding, bred in Texas by Douglas Scharbauer, owned by Mike Powers, and ridden by Richard Mangalee. After arriving from Texas in July, Gold Buyer won the Manitoba Mile by four-lengths over a solid seven-horse field and a heavy favourite, but then finished a disappointing fourth in the Uene Overnight Stakes.

Mongolian Wind, a three-year-old Kentucky-bred gelding owned by Mongolian Stable and Andrew Stronach, has only three starts in his career. He finished seventh in a maiden claiming race at Santa Anita on May 23, won a maiden claiming race at Los Alamitos on June 28 and then arrived at Assiniboia Downs in August and immediately went out and won the 72nd running of the Manitoba Derby.

No one but Andrew Stronach is absolutely, positively certain what Andrew Stronach will do on Monday, but if both Deep Explorer and Mongolian Wind are scratched, this will definitely open things up for Gourneau and Sir Bronx along with Murray Duncan’s Plentiful and Rollin Sevens, Mike Nault’s Tiger by His Tail, who won his last outing, an Allowance Optional race on Aug. 31 and Fred Rawson’s Lifesbeengoodsofar, who finished second on the Uene Overnight Stakes and finished second in an Allowance Optional race on July 21.

Meanwhile, this coming Wednesday night, it’s the second stakes race of the week, the $30,000 J.W. Sifton Stakes for Manitoba-bred three-year-olds over a mile and an eighth. McKague is the 4-5 morning line favourite, also the choice of Kirt Contois, followed by Cross Lake Proud (5-2) and Devil’s Time (6-1).