Mongolian Wind Makes It a Double 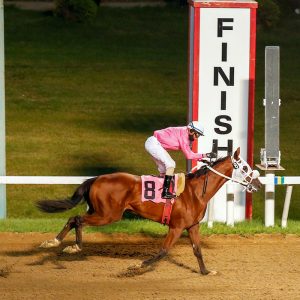 WINNIPEG — It’s not hard to imagine what might have happened had owner Andrew Stronach left both of his horses in the biggest race on Assiniboia Downs’ September schedule: The $30,600 Gold Cup could have been a two-horse race.

However, Stronach did scratch his morning-line favourite Deep Explorer (4-5) and let his Manitoba Derby champion Mongolian Wind run by himself.

It was an outstanding bit of thoroughbred racing strategy.

Monday night at the Downs, Stronach’s talented three-year-old gelding Mongolian Wind made it two-in-a-row, winning the 63rd running of the Manitoba Gold Cup, by nearly two lengths over a big surprise, the Michael Nault-trained Tiger by His Tail.

Up against the best older horses on the grounds, Mongolian Wind was one of the two youngest in the field and was racing for only the fourth time in his career — and only second the time at Assiniboia Downs. Of course, all that didn’t hurt him. In his first race in Winnipeg, he won the Manitoba Derby. Now, he has claimed that rare combination of both the Derby

And it didn’t hurt that jockey Wilmer Galviz gave him an almost perfect ride over the stamina-testing mile and one-eighth race. For the first half mile he sat comfortably back in fifth place and watched the other contenders battle it out on the front end of a fast pace. Then, on the final turn, Galviz sent Mongolian Wind out to force the issue. He took the lead by a nose at the three-quarter pole and then shook off his rivals down the stretch and won quite easily.

Mongolian Wind is a three-year-old Kentucky-bred gelding owned by Mongolian Stable and Andrew Stronach and trained by Wayne Eno. Before Monday night’s race he had only three starts in his career. He finished seventh in a maiden claiming race at Santa Anita on May 23, won a maiden claiming race at Los Alamitos on June 28 and then arrived at Assiniboia Downs in August and immediately went out and won the 72nd running of the Manitoba Derby.

There had been talk all week that this was going to be Mongolian Wind’s prep for the Canadian Derby on Sept. 27, at Century Mile in Edmonton, and it turned out that he’s ready to go west and win.

Meanwhile, this coming Wednesday night, it’s the second stakes race of the week, the $30,000 J.W. Sifton Stakes for Manitoba-bred three-year-olds over a mile and an eighth. McKague is the 4-5 morning line favourite, also the choice of Downs track announcer and handicapper Kirt Contois, followed by Cross Lake Proud (5-2) and Devil’s Time (6-1).

The Sifton will be Race 4 on Wednesday night and will go to post at about 9:05 p.m.