Manitoba Legislature May Return to Somewhat Normal During Pandemic 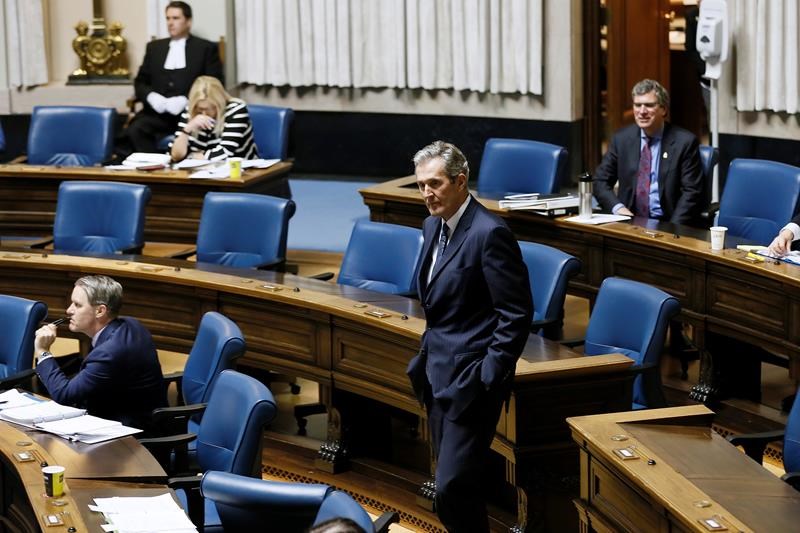 Manitoba Premier Brian Pallister makes his way to his seat during question period at the Manitoba Legislature in Winnipeg, Wednesday, May 6, 2020. (THE CANADIAN PRESS/John Woods)

WINNIPEG — The Manitoba legislature may operate closer to normal when politicians return to the chamber next month, despite the ongoing COVID-19 pandemic.

The Progressive Conservative government, which has a backlog of dozens of bills from the spring, is negotiating with opposition parties on a plan that would remove some of the restrictions put in place when the outbreak started.

“The nature of that, specifically in terms of detailed positioning within the chamber and so on, is under discussion along with other items.”

The legislature session was put on hold in March at the start of the outbreak. When it resumed, politicians met one day each week. And to ensure social distancing, each party could send only one-third of their members into the chamber.

The government’s agenda had already been pushed back by the Opposition New Democrats, who used stalling tactics for several days to bring proceedings to a halt. Later, Pallister rejected opposition demands to reconvene the legislature during the traditional summer break.

As a result, dozens of proposed laws that were introduced last winter have yet to come to a final vote. One bill would loosen restrictions on Sunday and holiday shopping hours. Another would tighten restrictions around public consumption of cannabis. A third would give the provincial cabinet temporary authority to set electricity rates, which are normally set by the Public Utilities Board.

Even the government’s annual budget has been sitting in limbo. The bill that enacts tax changes has yet to be voted on and committee hearings on the budget, which normally run for weeks, have yet to start.

When the legislature reconvenes in early October it will sit for full weeks instead of just one day a week, Pallister said. But whether all 57 members will be able to sit in the chamber remains to be seen.

NDP Leader Wab Kinew said his party is eager to resume legislature proceedings and question the government on a wide variety of topics, including its response to the pandemic.

Kinew would not commit to letting all the government bills come to a vote. He said time may be short in the scheduled fall sitting.

“If this government wants to pass their budget, I think they’ll be hard-pressed for time just to do that and go through all the phases properly,” Kinew said.

“And we are going to be expecting them to do all the phases properly.”

Manitoba saw a spike in COVID-19 cases in July and August, although numbers so far in September have appeared to level off. Health officials reported 16 new cases Wednesday, bringing the provincial total to 1,365. Sixteen people have died from the novel coronavirus.