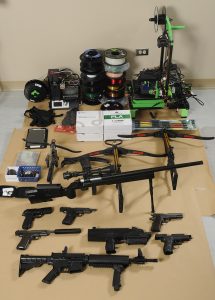 Items seized in The Pas as part of an investigation into the manufacturing of firearms. (RCMP HANDOUT)

Manitoba RCMP have laid charges after breaking up a firearm manufacturing operation in The Pas.

The Canada Border Services Agency contacted RCMP in August after intercepting a firearm silencer being smuggled into Canada.

The investigation led to the execution of two search warrants in The Pas on September 1 and 2 at a home on Reader Street.

Patsy Shawaga, 49, and Trent Swanson, 49, both of The Pas were arrested and charged with numerous firearms offences.