McKague Wins Sifton in a Romp 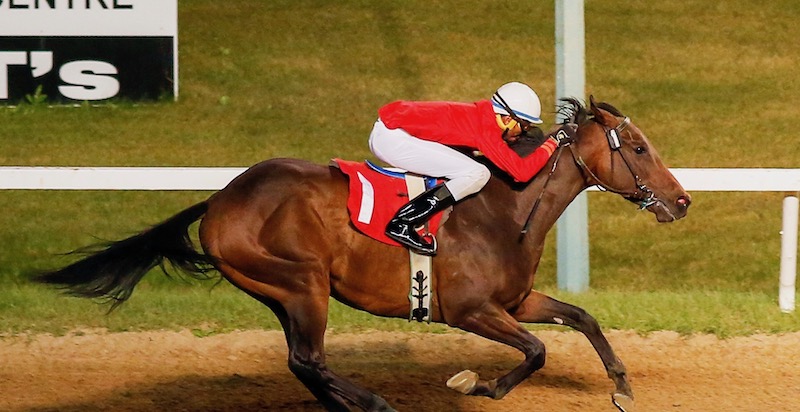 WINNIPEG — It could not have been any easier for Stanley Chadee Jr. and McKague.

On a chilly Wednesday night at Assiniboia Downs, the dark bay gelding, owned and bred by Nearco Ltd., went off as the 2-5 favourite and proceeded to demolish the field, winning the 51st running of the $30,200 J.W. Sifton Stakes for Manitoba bred three-year-olds by almost 11 lengths.

This mile-and-one-eighth test was locked up before the horses reached the first turn. McKague got out quickly, opened up a lead in the first run past the empty (damn COVID) grandstand and led by a length and half down the backside. Whowantsacoldone took a shot at the leader as the horses entered the final turn, but that just seemed to wake up the leader. McKague felt the challenge and kicked it into another gear. Hand-ridden all the way by Chadee McKague started opening up and at the head of the stretch, the jockey tapped him twice, and McKague responded by opening up an eight, nine and finally an 11-length advantage. It was a romp.

Trained by Carl Anderson, McKague is by Secret Circle out of Northern Cotton by High Cotton. He’s had eight career races and now has two wins and has finished in the money seven times. He won $18,360 for his first-place finish in Wednesday’s Sifton — his first Stakes victory – and has now won $29,922 during his two-year career.

There is now only two nights of racing remaining in the 2020 meet but the trophy for champion jockey could be awarded right now.

Antonio Whitehall has led all season and heading into the final week, he leads No. 2 Stanley Chadee Jr. by 28 first-place finishes. Whitehall, who won the 2018 ASD jockey title with just 41 wins, has 73 victories after winning five times this past week. He also has 50 seconds and 55 third-place finishes in a track-leading 286 starts and was in the money 12 times on Monday, Tuesday and Wednesday. He has now earned a whopping $681,321 for his owners. Whitehall has finished in the money an amazing 64 per cent of the time this season.

Whitehall, who has been flying back and forth between Assiniboia Downs in Winnipeg and Century Mile in Edmonton, is also the No. 3 jock at the Edmonton track. He has 24 wins, 17 seconds and 20 thirds and $213,302 in winnings in 126 starts at Century Mile. As a result, he’s the leading jockey in Canada in 2020 with 97 victories. He could reach the Century mark in Edmonton this weekend.

Meanwhile, on the trainer’s ledger, Jerry Gourneau is so far ahead now that the rest of the trainers’ group can barely see him. The 2018 champion who hails from Turtle Mountain Chippewa Reserve in Belcourt, North Dakota has 70 wins, after winning five times this past week. He also has 47 seconds, 41 thirds and an incredible $669,180 in earnings in 284 starts this season. He leads No. 2, defending champion Tom Gardipy Jr., from Beardy’s and Okemasis Cree Nation in Duck Lake, Sask., by 33 victories.

Gourneau has simply been brilliant during this 50-day meet and has won more races in 50 days than any trainer in Assiniboia Downs history. With two nights of racing left on the schedule, he is eight wins behind the legendary Tom Dodds for the track record, a record that was set in 1990 during a 117-day meet.