Home » News » PIICNIIC is Not Your Average Picnic Bench

PIICNIIC is Not Your Average Picnic Bench 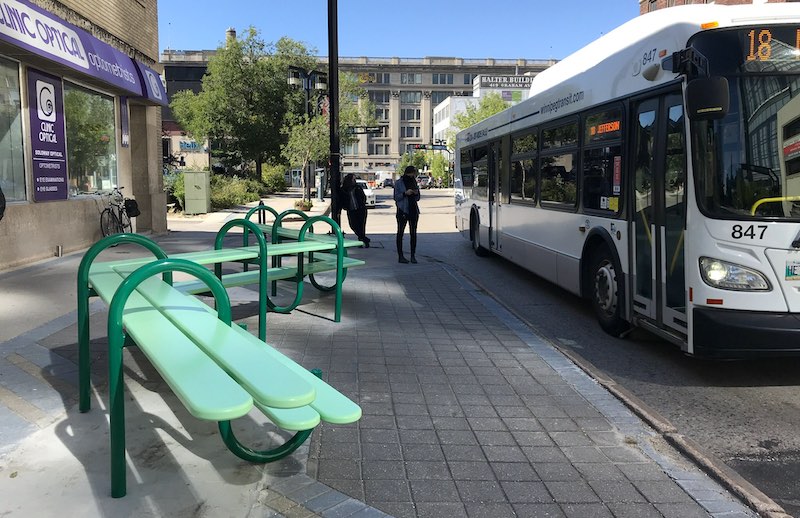 PIICNIIC is the first of two installations from the Benchmark 2020 competition. (@STOREFRONTMB1 / TWITTER)

WINNIPEG — There’s a new spot downtown to sit and take a load off.

PIICNIIC is a fresh installation from Benchmark 2020, a design competition supported by the Downtown Winnipeg BIZ, the Winnipeg Trails Association and Storefront Manitoba.

“Our goal for the PIICNIIC bench was and is to create a public amenity that can be enjoyed all year by everyone, whether physically engaging with it, or simply as a moment of visual delight while passing by,” Marion said.

“Colour plays largely into this effort, taking the traditional ‘park green’ into hyper-saturated hues that contrast with the relatively neutral streetscape, and remain visually striking throughout Winnipeg’s four distinct seasons.”

Marion and Wiebe say the hope is that PIICNIIC might be reproduced in various configurations and colours for other locations in Winnipeg.

PIICNIIC is the first of two installations as part of Benchmark 2020. The second, chosen to be in Pinawa, Manitoba, will be unveiled next summer. Titled “Reflection,” design firm Sophie & Hans from Berlin, Germany were the creative brains behind the project.

We’re thrilled to unveil this snazzy PICNIC table – in front of @ShawarmaKhanWPG on Graham with our partners @storefrontMB1 & @WinnipegTrails! pic.twitter.com/x2pqvWklAT