‘Rescue on the Island’ Raises $223K for STARS 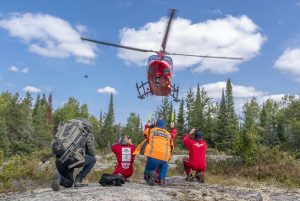 WINNIPEG — Using only their phones and network of connections, three Manitobans raised much-needed funds for STARS air ambulance this week while stranded on an island in Whiteshell Provincial Park.

The seventh annual STARS Rescue on the Island brought in more than $223,000 for the non-profit air rescue service.

This year’s participants were Al Babiuk, president and CEO of Loewen Windows and Doors, Bernhard Teichroeb, sales and project manager of Wiebe’s Steel Structures in Morden, and Sarah Normandeau, councillor and recreational services manager of the, RM of Ste. Anne.

The three were flown to an island and the only way for them to return to civilization was to fundraise as much as possible. Each individual also participated in a series of challenges, including a simulated medical scenario and survival challenge.

“With the global pandemic making the world of fundraising significantly more difficult, we were absolutely thrilled and inspired by how well our participants did this year,” said Colleen Mayer, STARS’ director of development, Manitoba.

“Since it began in 2013, Rescue on the Island has raised more than $1.5 million in support of STARS’ life-saving work in the province. While we appreciate each of those dollars, the funds raised this year will hold a special place in the history of our event.”

This year’s event was scaled back due to COVID-19, where only a minimum number of STARS staff and volunteers were involved, including a reduction in participants.

The on-duty STARS helicopter remained at the Winnipeg base while a backup aircraft was brought in for the fundraiser.

Manitoba Shared Health recently announced STARS has been chosen to take over air ambulance services from the province’s Lifeflight program. The change will occur no sooner than December 10.

Thank you to Bernhard, Sarah and Al – this year’s @STARSambulance Rescue on the Island participants. Every dollar raised helps us to continue to be there for the next patient. #MBSTARS ?????? pic.twitter.com/MvpJ6iZvjE