Home » The Canadian Press » Lengthy, Enjoyable Fall Ahead for Most of Canada, Weather Network Predicts

Lengthy, Enjoyable Fall Ahead for Most of Canada, Weather Network Predicts 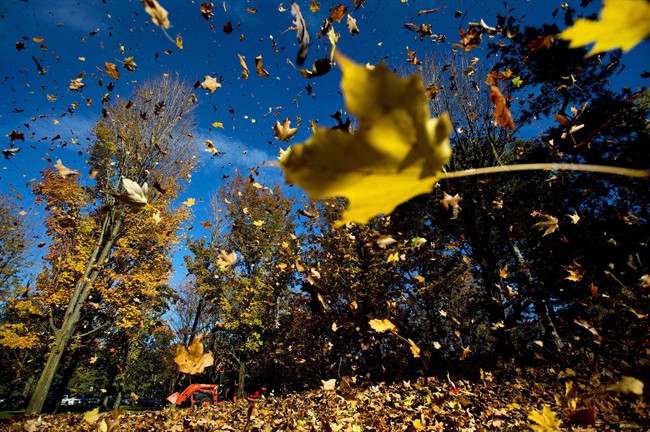 Park workers use a tractor with an industrial leaf blower to pile up fall leaves at High Park in Toronto on Monday, Oct. 28, 2013. (THE CANADIAN PRESS/Nathan Denette)

Canadians can look forward to a lengthy, pleasant fall that won’t give way to early winter temperatures and storms, according to one of the country’s top weather forecasters.

“We’re expecting a fall to savour across the country this year with a nice long finish,” Scott said in a telephone interview Sunday.

He said the sketch of the upcoming season should offer some relief for Canadians after last year’s “wild fall” that brought winter storms and cold temperatures.

“This seems like an overall pleasant fall for many with near to above normal temperatures for most of the country.”

In British Columbia, Scott said warm conditions and the threat of wildfire smoke may remain in the picture for a few more weeks.

But October and November seem likely to return to wet weather and cooler temperatures that hint at an early ski season in the coastal mountains.

The wet weather is predicted to travel across the Rockies in October, bringing more precipitation than usual to southern Alberta and southwest Saskatchewan.

While snow has already appeared in some parts of Alberta, where weather patterns can be unpredictable, Scott said this season “does not look like a fall that’s going to snap into winter come late October and November, like it sometimes does.”

He said temperatures and precipitation will hover at seasonal averages across the Prairies, with the exception of some colder weather in northwest Alberta.

There isn’t any sign of dramatic snowstorms like the one in southwestern Manitoba last fall, Scott added.

“It’s not going to be a warm fall necessarily — it’s more about the absence of an early start to winter across this region,” he said.

As for Ontario and Quebec, Scott said the cooler temperatures that arrived early in September after a hot summer don’t represent the full picture of the season ahead, which bodes well for camping and other outdoor pastimes.

“It looks like some pretty good leaf-viewing weather and overall — whether it’s for outdoor education or just getting outside — pretty good weather for October, even into early November,” he said.

He said temperatures will be above normal for most of the fall season in much of Ontario and southern Quebec, and precipitation will be “near normal.”

Atlantic Canadians can expect this summer’s pattern of higher temperatures to continue into the fall, Scott said. More precipitation is in the forecast after a dry summer, especially across northern New Brunswick, Labrador and in parts of eastern Quebec.

Tropical storms from the south are a wild card to watch as they develop, Scott said, potentially bringing more rainfall to the region.

In Northern Canada, temperatures will be fairly consistent with the season across the territories, Scott said, with dips below average in the southern parts of the Northwest Territories and Yukon.

Precipitation will be fairly normal in the North, though it may be above average in parts of western Yukon.

Scott also shared early predictions about a winter that looks like it may bring cold and snow to the west and fluctuation between mild weather and intense snow to the east.

He said the Weather Network is watching a developing La Nina in the Pacific Ocean. Known as “the cool cousin of El Nino,” Scott said La Nina can signal a colder, snowier winter in Western Canada.

That’s good news for skiers, Scott said, but he noted the potential for “significant snow right down to sea level” could be a problem for the greater Vancouver area.

La Nina winters typically feature big storms across the country and those seasons can be “a bit fickle” in Eastern Canada, Scott said. This winter may feature intense winter storms in the East with mild periods in between.

Seasonal weather predictions should be looked at as a rough outline rather than a detailed picture, Scott said, as he advised people to enjoy the autumn before a potentially intense winter sets in.

“It’s a time to get outdoors and enjoy it, because when winter comes we do think it’s going to come with a little bit of gusto this year.”