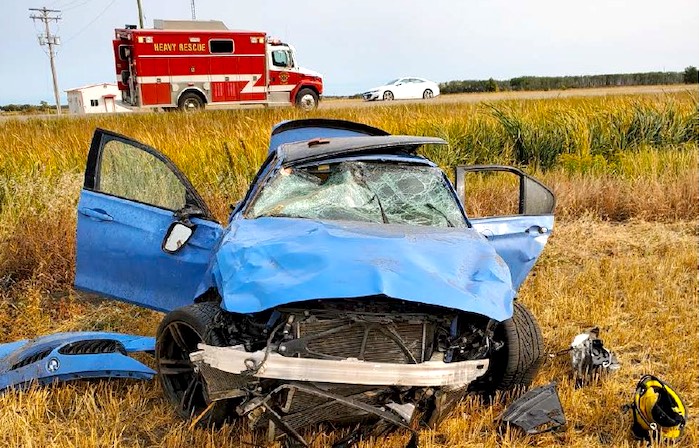 Several people were injured in a single-vehicle crash on Highway 2 near St. Claude, Manitoba on September 14, 2020. (RCMP HANDOUT) 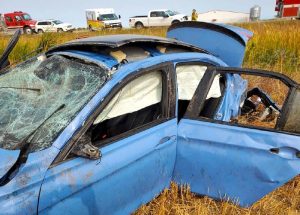 Police say speed is a factor in the collision that sent multiple people to hospital. (RCMP HANDOUT)

RCMP say a BMW sedan and a Chevrolet Malibu were speeding eastbound at around 10 a.m. when they came upon another vehicle in the eastbound lane. The drivers of the two vehicles decided to simultaneously pass, with the Malibu going into the westbound lane of traffic and the BMW going onto the gravel shoulder.

A 24-year-old woman suffered serious injuries and was transported to hospital in stable condition.

A 21-year-old man was ejected and suffered life-threatening injuries, he was transported to a Winnipeg hospital by STARS and remains in critical condition.

Another woman suffered minor injuries and was taken to hospital.

Speed is considered to be a factor in the collision.

“Our officers are encountering more and more reckless drivers who are endangering the lives of every single person on our roads,” said Sergeant Mark Hume of the Manitoba RCMP Traffic Services.

“Speeding along with extremely dangerous driving behaviours are directly leading to serious injuries and deaths across the province. This has to stop.”

Treherne RCMP is continuing to investigate.

At 10am on Sept 14, 2 cars were racing on #MBHwy2. As they came upon another vehicle, one car took the WB lane & the other took the shoulder, lost control 1 km later & rolled several times. 21yo passenger ejected & in critical condition. 21yo driver uninjured. #rcmpmb #noexcuses pic.twitter.com/BcMcCk1gbV