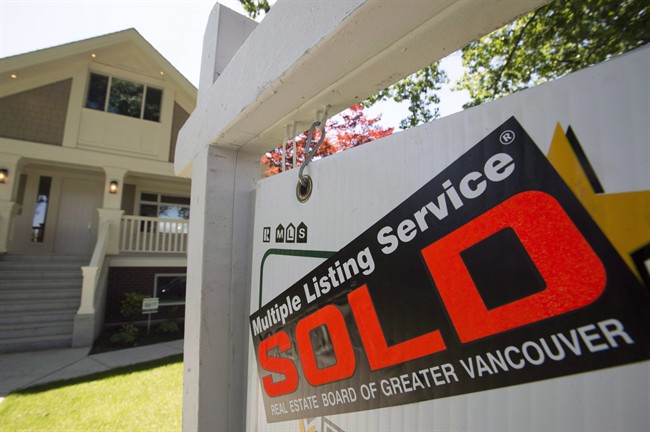 A sold sign is pictured outside a home in Vancouver on June 28, 2016. (THE CANADIAN PRESS/Jonathan Hayward)

OTTAWA — The Canada Mortgage and Housing Corp. will be getting a new name in the coming months, part of a larger rebranding by the federal housing agency to better reflect its changing mandate.

The head of the Crown corporation says the decades-old name overemphasizes the financing of home ownership and does not do enough to highlight housing affordability.

In an interview with The Canadian Press, Evan Siddall says changing the name would better align with the corporation’s present — and its future.

The Liberal government made the agency a key overseer of the national housing strategy, involving tens of billions of dollars in combined federal, provincial and private-sector funding and financing.

Federal legislation is needed for an official name change, but Siddall says that doesn’t prevent the organization from using a trade name.

A new name along the lines of “Housing Canada” will be the subject of consultations with the 2,000-strong workforce at the agency.

“I would not blame other people for how they perceive us, because the only people who control that is us,” Siddall said Thursday.

He said the word “mortgage” in the current name conveys that CMHC is a financial institution, which is partly true. But it neglects its focus on helping people afford a place to live, whether that be through buying, renting or a social housing program.

“We’ve looked at this question of what our brand is, whether we could use something that was different even without a legislative change,” he said.

“Those are all things that we’ve looked at and that I think actually we should do and we’ve talked about it pretty openly in the company.”

Last year, CMHC set the ambitious goal of providing all Canadians with homes they can afford and meet their needs by 2030.

The COVID-19 pandemic has caused an economic hurdle on the path to affordability.

CMHC said last week that about $1 billion worth of mortgage payments were deferred each month during the pandemic. The agency’s annual residential mortgage industry report also said fewer Canadians are likely to get ahead on their mortgage payments this year, compared with 2019.

Siddall said the pandemic has significantly changed how governments look at housing among other parts of the economy.

“People always talk about the current moment as being an inflection point,” he said.

“There’s a moment now that policy-makers are reflecting on and we’ll see what happens in the coming weeks and months, but this is for sure a moment like that.”