A smaller, ceremonial ride gets the green light 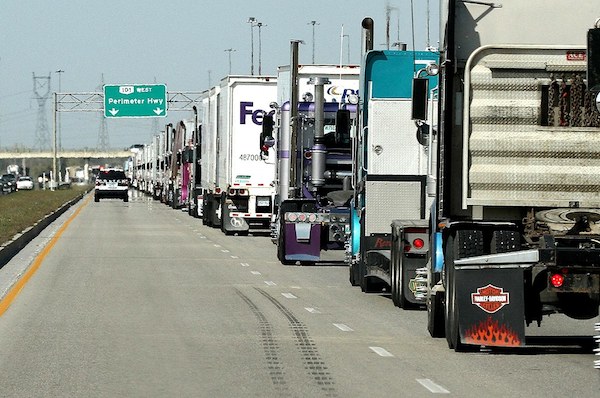 Semis will make a loop around the Perimeter Highway on Saturday in the sixth annual World’s Largest Truck Convoy. (SPECIAL OLYMPICS MANITOBA / HANDOUT)

The 13th annual Truck Convoy in support of Special Olympics Manitoba is going virtual this year, but that doesn’t mean some truckers won’t still be making a loop of the Perimeter Highway.

COVID-19 put a wrench into the plans of the fundraiser, which usually attracts hundreds of vehicles from across the province. Truck drivers have since been fundraising virtually for Special Olympics athletes throughout Manitoba.

Originally scheduled for Saturday, September 19, organizers are now asking participants to check-in via social media from wherever their travels have taken them during the week of September 12-19 using the hashtags: #TruckConvoy2020, #VirtualTruckConvoyMB, #SOTogether, and #ThisIsWhyWeConvoy.

“Special Olympics has a way of bringing everyone together, setting aside differences and building communities of acceptance,” said committee chair Matt Basset.

“The fact that Special Olympics, law enforcement, and the trucking industry can work together through such a difficult year and still pull off a top-class event like this year’s Truck Convoy is a testament to how the athletes of Special Olympics are a true inspiration.”

A small ceremonial convoy will still continue on Saturday, consisting of 15 trucks and Manitoba law enforcement vehicles saluting frontline workers departing at 10 a.m. from the Trans Canada Centre in Ile-des-Chenes and following the traditional convoy route east around the Perimeter Highway.

The Manitoba Truck Convoy has raised more than $700,000 for Special Olympics Manitoba since 2008.