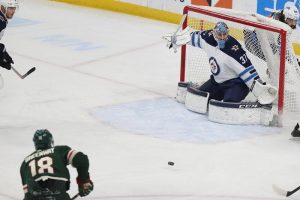 Winnipeg Jets netminder Connor Hellebuyck has been named the league’s goalie of the year by winning the Vezina Trophy.

“This year was just such a mental grind but also so fun,” said Hellebuyck, who’s team was ousted from playoff contention by the Calgary Flames in the qualifying round.

“I would have liked for playoffs to go a little bit better, but when I’m looking back on this year, I’m going to say we did some great things.”

There are a lot of good goaltenders in the NHL, Hellebuyck said, but the Winnipeg netminder is already planning to defending his title again next season.

“I’m looking forward to the fight to get back into Veznia talks next year,” he said. “And I’m going to enjoy this one while I have it.”

The NHL’s annual awards ceremony is generally a glitzy affair held in Las Vegas, but due to the COVID-19 pandemic, this year’s honours were announced at an empty Rogers Place in Edmonton.