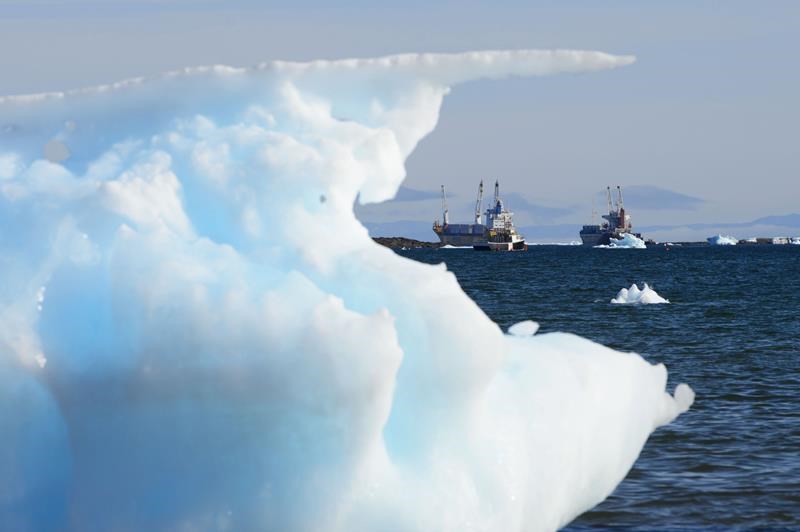 Ships are framed by pieces of melting sea ice in Frobisher Bay in Iqaluit, Nunavut on Wednesday, July 31, 2019. (THE CANADIAN PRESS/Sean Kilpatrick)

Satellite pictures show Arctic sea ice is at its second-lowest level since such records began and barely missed breaking the old mark.

“There’s no going back at this point,” said Mark Serreze of the U.S. National Snow and Ice Data Center.

Although some melting might yet occur, the centre fixed Monday as the day when the overall level of all Arctic sea ice — crucial to northern ecosystems and southern weather patterns — stops shrinking and starts growing again.

All 14 of the lowest ice years on record have happened in the last 14 years, said Serreze.

Like 2012, this year’s low depended on a lot of things happening at once, Serreze said. That included an Arctic heat wave on the Siberian side, which helped create unprecedented fires across the Russian tundra.

The melt cost the Arctic much of its remaining multi-year ice, meaning the ice is increasingly seasonal. The old coverage of thick ice that survives the summer will soon be a thing of the past, said Serreze.

“I don’t think there’s any escaping that. It’s just too warm now.”

The implications are many, said David Barber, an Arctic systems scientist at the University of Manitoba.

Whole ecosystems that hang on the bottom of the ice are disappearing. Invasive species from small fish to killer whales are moving in from both east and west.

Biologists have recently estimated that polar bears along south Hudson Bay will have trouble raising cubs by the end of the decade, due to the loss of their frozen hunting platform.

It also means the remaining ice has more room to drift, which leads to choking jams in places that don’t normally experience them.

“Some people locally will go, ‘Hold it. There’s all kinds of ice out here,'” Barber said. “That’s because it’s so much more mobile.”

Published research suggests the strength of the jet stream — a high-atmosphere river of air that influences continental weather patterns — depends on the temperature difference between the Arctic and mid-latitudes. Less ice and a warmer Arctic Ocean means a weaker jet stream.

“That (open water) is absorbing all that heat and you have to get rid of it in the fall before you can start to form ice,” Barber said. “Which means you’ll have a thinner ice cover.”