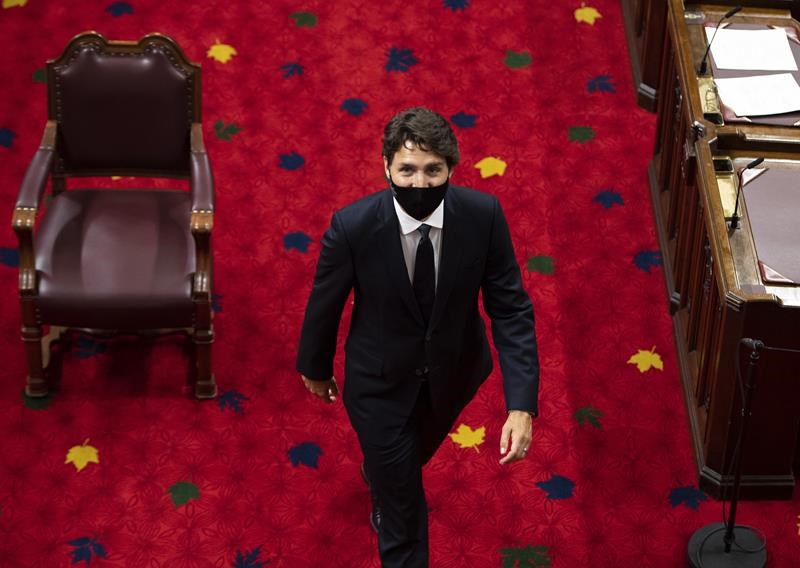 Prime Minister Justin Trudeau heads back to his seat before the delivery of the Speech from the Throne at the Senate of Canada Building in Ottawa, on Wednesday, Sept. 23, 2020. (THE CANADIAN PRESS/Justin Tang)

TORONTO — A dramatic tripling of daily new cases of COVID-19 in the past month, mostly among young people, has prompted the prime minister to declare the arrival of the second wave of the pandemic and that Canadians likely won’t be able to gather for Thanksgiving.

“We’re on the brink of a fall that could be much worse than the spring.”

Trudeau said Canadians can’t do anything to change the numbers now, or even tomorrow.

“But what we can change is where we are in October, and into the winter,” he said.

“It’s all too likely we won’t be gathering for Thanksgiving, but we still have a shot at Christmas.”

Canada’s chief public health officer, Dr. Theresa Tam, said the country had seen an average of more than 1,100 new cases of the novel coronavirus a day this past week compared with about 380 a day in mid-August.

“Canada is at a crossroads with the COVID-19 epidemic trajectory,” Tam said before Trudeau’s address. “Unless public health and individual protective measures are strengthened and we work together to slow the spread of the virus, the situation is on track for a big resurgence in a number of provinces.”

While the new cases were primarily among young adults, more than 400 schools in Quebec and another 153 in Ontario reported at least one case of the illness. The figures from the group COVID Ecoles Quebec and the Ontario government came as authorities seek ways to curb the spread of COVID-19 among younger people.

Data from Ontario show cases among those in their 20s have risen sharply in the past month, with one expert attributing the increase in part to the reopening of schools and universities.

In an effort to tackle the problem, several provinces, cities and universities have warned of stiff fines for violating anti-COVID restrictions. However, Quebec said it would not allow police to enter homes without a warrant to break up gatherings that violate the measures.

The worrisome upward trend in new cases came as the federal Liberal government laid out its plan to take on the second wave.

“To prevent small clusters from becoming major outbreaks, communities may need to enact short-term closure orders,” the government said in its throne speech.

Stringent lockdowns in the spring caused unprecedented economic disruption, prompting the government to spend tens of billions of dollars on supports as unemployment skyrocketed.

The throne speech promised, among other things, an extension of the federal wage-subsidy program until next summer, more aid for businesses and help to boost testing capacity. People in various cities have waited for hours or even days for virus testing. Safety concerns led a hospital in Kitchener, Ont., to close its drive-thru testing centre as people arrived in the wee hours.

In all, COVID-19 has killed about 9,250 people in Canada, while the cumulative case count has been edging toward the 150,000 mark.

On Wednesday, Quebec reported 471 new cases. Another four reported deaths from the novel coronavirus brought the province’s total fatalities to 5,809.

Ontario, which has shown a steady increase in new cases since mid-August, after months of declines, reported 335 new cases Wednesday and another three deaths. Almost 70 per cent of new infections were in people under the age of 40.

Concern is also mounting as more long-term care homes in Ontario, brutally hit by the virus earlier in the year, report outbreaks. Almost 70 per cent of fatalities have been among those aged 80 and older and another 27 per cent were 60 to 79 years of age.

While older people and those with underlying health conditions are more susceptible to severe illnesses from SARS-CoV-2, younger people can spread the disease — often before showing any symptoms.

“When there’s so much in the community, it can escalate into the populations with more vulnerability,” Dr. Vera Etches, medical officer of health in Ottawa, one of the harder hit cities, said.

Ontario data indicates new cases among people in their 20s have reached similar levels to those seen among people in their 80s in mid-April. Along with school reopenings, Dr. Brian Ward, a professor of medicine at McGill University, cited bars and parties as key factors, along with a “general sense of invulnerability” among younger people.

Winnipeg, for example, accounted for 30 of Manitoba’s 42 new cases reported Wednesday, with possible exposures at restaurants, bars and a pub trivia night, the province said.

Trudeau sympathized with Canadians feeling the stress of a second wave, but urged people to be strong.

“We can bend the curve. We can build a stronger future. We can define the change.”